The Mysterious Disappearance of Aidan S. (as told to his brother) (Library Binding) 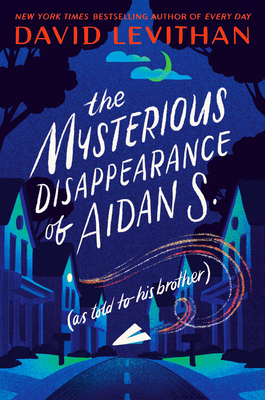 By David Levithan
$21.99
Available and Ships as Soon as Possible.

“The whole town is in an uproar when Aidan, Lucas’s older brother, completely vanishes. When Aidan is found in the attic almost a week later, that concern turns into frustration. None of the adults believe what Aidan is telling them, that he accessed another world through the old attic wardrobe, a portal that has now closed. What Lucas finds hardest to believe is that when Aidan describes the green skies and foreign creatures of Aveinieu, it seems that he would rather be back there than home with his family. A thought-provoking novel of magical realism that leaves much to the imagination in both the ordinary and extraordinary. Bound to become a modern classic.”
— Andrew King, University Book Store, Seattle, WA

Aidan disappeared for six days. Six agonizing days of searches and police and questions and constant vigils. Then, just as suddenly as he vanished, Aidan reappears. Where has he been? The story he tells is simply. . . impossible. But it's the story Aidan is sticking to.

His brother, Lucas, wants to believe him. But Lucas is aware of what other people, including their parents, are saying: that Aidan is making it all up to disguise the fact that he ran away.

When the kids in school hear Aidan's story, they taunt him. But still Aidan clings to his story. And as he becomes more of an outcast, Lucas becomes more and more concerned. Being on Aidan's side would mean believing in the impossible. But how can you believe in the impossible when everything and everybody is telling you not to?

When not writing during spare hours on weekends, David Levithan is editorial director at Scholastic and the founding editor of the PUSH imprint, which is devoted to finding new voices and new authors in teen literature. His acclaimed novels Boy Meets Boy and The Realm of Possibility started as stories he wrote for his friends for Valentine's Day (something he's done for the past 22 years and counting) that turned themselves into teen novels. He's often asked if the book is a work of fantasy or a work of reality, and the answer is right down the middle—it's about where we're going, and where we should be.

“A well-paced story about the collision of realities in the vein of Laura E. Weymouth and Seanan McGuire.” –Publishers Weekly, starred review

“A stellar novel that deftly examines the uncomfortable reality that not everything has a satisfying answer. For example, sometimes people go away and we’re lucky if they come back, and we may be better off focusing less on where they’ve been but on the fact that they’ve returned.” –The Bulletin

"An insightful story, with echoes of Narnia, that will appeal to thoughtful and sophisticated readers.” —School Library Journal