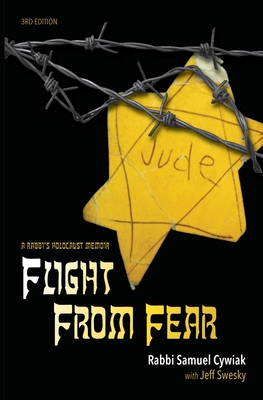 By Rabbi Samuel Cywiak, Jeff Swesky (With)
$15.95
Available and Ships as Soon as Possible.

Near the end of August 1939, a nineteen-year-old rabbinical student by the name of Samuel Cywiak returned home to Wyszk w, Poland to visit his family for the high holidays; the most solemn and important period in the Jewish calendar. Days later Germany invaded Poland, initiating the start of World War II. Shortly after the occupation of Wyszk w, the Nazis marched Samuel and his father, along with a group of nearly seventy teachers and leaders from their shtetl, into the woods across from the Bug River. Thanks to the actions of his father, Samuel was the sole survivor of a mass execution. This event initiated his "flight" to flee the Nazis and reunite with the rest of his family.

Rabbi Samuel Cywiak's Holocaust memoir, Flight from Fear, chronicles the six years during World War II where, not only did he survive the wraths of both Adolf Hitler and Joseph Stalin and witness many horrors throughout Europe, but he was ordained a rabbi, became a husband and father, and witnessed and experienced many miracles.

He was ordained by Rabbi Chaim ben Zion Notealevitz in New York and later certified fit in matters of Jewish legal questions by the great Moshe Feinstein. His cousin, Rabbi Shlomo Goren, was Chief Rabbi of Israel for three terms from 1973 to 1983. Rabbi Cywiak was honored by former President of Venezuela, Carlos Andres Perez, for community service and has had a distinguished career as an Orthodox Rabbi, mohel, and cantor for over sixty years now.