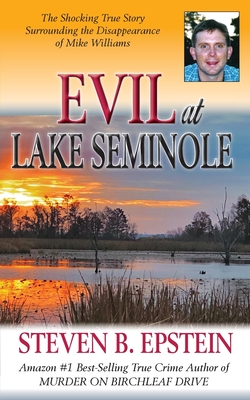 By Steven B. Epstein
$24.09
Available and Ships as Soon as Possible.

Did Mike accidentally
drown in a Florida lake?
Or was his disappearance the result
of a sinister plot to kill him?

The crisp, predawn hours of December 16, 2000, began much as they had many Saturdays for avid duck hunter Mike Williams--on Lake Seminole, where he'd go to relax after a stressful workweek. The Florida State grad was juggling fatherhood with a thriving real estate appraisal career. And that very evening? He and his high school sweetheart, Denise, planned to celebrate their sixth wedding anniversary.

When an intense search of the lake's marshy waters turned up only his hunting boat and a camouflage hat, investigators reached the morbid conclusion he'd fallen overboard and drowned, his body eaten by alligators. Nearly two decades passed before the dark secrets hidden at Lake Seminole--and elsewhere--were finally revealed.

EVIL AT LAKE SEMINOLE is a diabolical tale of betrayal, greed, and deception--and of a courageous mother who devoted her life and savings to uncovering the truth of what really happened to her son.