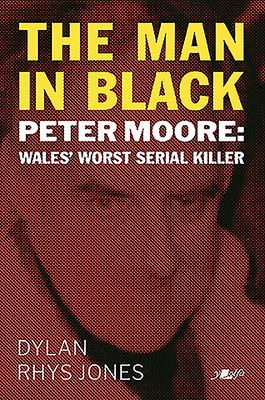 Written by criminal defense lawyer Dylan Rhys Jones, this is the true story of his experience of defending Rhyl serial killer Peter Moore, known as 'The Man in Black', who was found guilty in 1996 of murdering four men in north Wales and seriously assaulting over 30 more over a 20-year period.

In his concluding remarks while sentencing Moore, Judge Mr Justice Maurice Kay referred to him as "as dangerous a man as it is possible to find". Moore admitted the killings and described them in detail, but then changed his story, blaming someone else for the murders. As his brief, the author spent hours discussing with Moore his motivation for murder, his compulsion for the violent sexual assaults, his background, his plans for further murders, his involvement with a circle of friends in north Wales and Merseyside who had similar strange sexual proclivities, and the overwhelming urge he felt to kill. An in-depth firsthand account of full and frank dealings with a particularly vicious individual who apparently gained pleasure from violence, and an insight into the professional and personal pressures suffered by a lawyer during the yearlong process leading up to such a high-profile trial.

The book also discusses its aftermath, including Jones' discussions with Moore regarding an appeal and about how he was coping in prison, and reveals new information undisclosed by the killer until now. He recalls one candid discussion when he asked Moore how it felt to kill someone, and the chilling reply he received. The book will reveal the stress of dealing with a large murder case, the complexity of a serial killer's mind and the way a lawyer learns to deal with such an individual. The public's fascination with the sick or dangerously criminal mind never seems to wane.