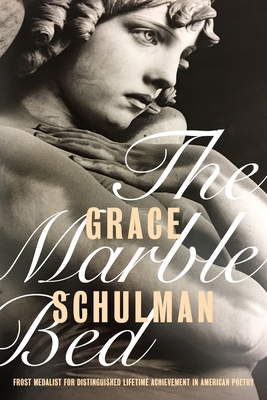 By Grace Schulman
$18.00
Available and Ships as Soon as Possible.

The Marble Bed is a vision; it is an ode to life.--Rowan Ricardo Phillips

Each poem in The Marble Bed journeys far, wandering the territory of love's psyche.
--Yusef Komunyakaa

One of the permanent poets of her generation.--Harold Bloom

Grace Schulman rises to new heights in these poems of lament and praise. In The Marble Bed, a couple dances on a shore that is at once a shining turf and a graveyard of sea toss, of cracked shells, a skull-like carapace, and emerald weed. Here things sparkle with newness: an orchid come alive when rescued from a trash bin; the new year hidden in an egret's wing; Coltrane's ecstatic flight; a seductive, come-hither angel; a meteor's arc; a rainbow's painted ribbons; a glacial rock that glowers in moonlight. Even the tomb sculptures in an Italian cemetery sparkle with vitality. Schulman, grieving for her late husband, believes passionately in the power of art to redeem human transience. Her faith in art enables her to move from mourning to joyful wonder of existence as she meditates on an injured world and concludes: Because I cannot lose the injured world / without losing the world, / I'll have to praise it.

Grace Schulman, winner of the Frost Medal for Distinguished Lifetime Achievement in American Poetry, is a member of the American Academy of Arts and Letters. She is the author of seven collections of poems and of a memoir, Strange Paradise: Portrait of a Marriage. She has held long posts as Poetry Editor of the Nation, Director of the Poetry Center, 92nd Street Y, and Distinguished Professor of CUNY's Baruch College, where she still teaches.