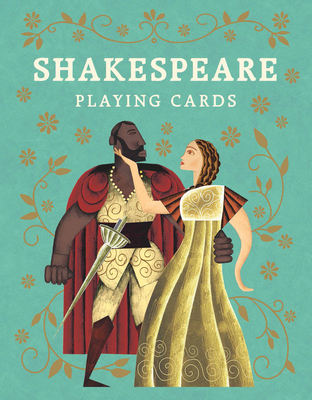 By Leander Deeny, Adam Simpson (Illustrator)
$14.99
Available and Ships as Soon as Possible.

A beautiful set of playing cards featuring illustrations of Shakespeare's most famous characters.

Play your favourite card games with Romeo and Juliet as King and Queen of Hearts, Lady Macbeth as Ace Villain, and let Adam Simpson's artwork bring Shakespeare's plays to life.

Arranged in four suits – with hearts = lovers, clubs = fools, diamonds = heroes and heroines, and spades = villains, plus two jokers, of course – this artist-illustrated deck of playing cards features 54 of Shakespeare's most famous characters. It includes a booklet with text about each character and their place in literary history.

Leander Deeny is an actor best known for his work on screen in Captain America and on stage with the Royal Shakespeare Company. His first book, Hazel's Phantasmagoria, is published by Quercus.

Adam Simpson has contributed to major exhibitions in London, New York, Edinburgh, Bologna, and Japan. His work has been shortlisted for a British Design Award and recent projects include artworks for BAFTA, Conran, and a stamp commemorating the London 2012 Olympics.