Diversity and Rabbinization: Jewish Texts and Societies between 400 and 1000 CE (Paperback) 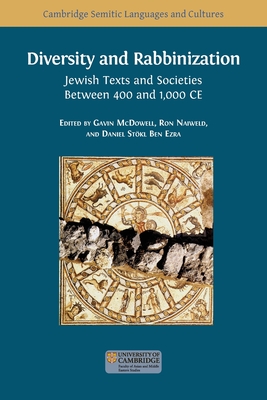 This volume is dedicated to the cultural and religious diversity in Jewish communities from Late Antiquity to the Early Middle Age and the growing influence of the rabbis within these communities during the same period. Drawing on available textual and material evidence, the fourteen essays presented here, written by leading experts in their fields, span a significant chronological and geographical range and cover material that has not yet received sufficient attention in scholarship.

The volume is divided into four parts. The first focuses on the vantage point of the synagogue; the second and third on non-rabbinic Judaism in, respectively, the Near East and Europe; the final part turns from diversity within Judaism to the process of "rabbinization" as represented in some unusual rabbinic texts.

Diversity and Rabbinization is a welcome contribution to the historical study of Judaism in all its complexity. It presents fresh perspectives on critical questions and allows us to rethink the tension between multiplicity and unity in Judaism during the first millennium CE.