Stories from the Magic Canoe of Wa'xaid (Paperback) 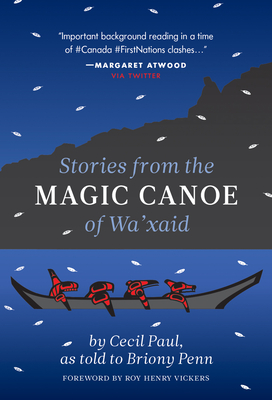 By Cecil Paul (Wa'xaid), Briony Penn (With), Roy Henry Vickers (Foreword by)
$25.00
Available and Ships as Soon as Possible.

A remarkable and profound collection of reflections by one of North America's most important Indigenous leaders.

My name is Wa'xaid, given to me by my people. 'Wa' is 'the river', 'Xaid' is 'good' - good river. Sometimes the river is not good. I am a Xenaksiala, I am from the Killer Whale Clan. I would like to walk with you in Xenaksiala lands. Where I will take you is the place of my birth. They call it the Kitlope. It is called Xesdu'w xw (Huschduwaschdu) for 'blue, milky, glacial water'. Our destination is what I would like to talk about, and a boat - I call it my magic canoe. It is a magical canoe because there is room for everyone who wants to come into it to paddle together. The currents against it are very strong but I believe we can reach that destination and this is the reason for our survival. --Cecil Paul

Who better to tell the narrative of our times about the restoration of land and culture than Wa'xaid (the good river), or Cecil Paul, a Xenaksiala elder who pursued both in his ancestral home, the Kitlope -- now the largest protected unlogged temperate rainforest left on the planet. Paul's cultural teachings are more relevant today than ever in the face of environmental threats, climate change and social unrest, while his personal stories of loss from residential schools, industrialization and theft of cultural property (the world-renowned Gps'golox pole) put a human face to the survivors of this particular brand of genocide.

Told in Cecil Paul's singular, vernacular voice, Stories from the Magic Canoe spans a lifetime of experience, suffering and survival. This beautifully produced paperback edition is in Cecil's own words, as told to Briony Penn and other friends, and has been meticulously transcribed. Along with Penn's biography of Cecil Paul, Following the Good River: The Life and Times of Wa'xaid, Stories from the Magic Canoe provides a valuable documented history of a generation that continues to deal with the impacts of brutal colonization and environmental change at the hands of politicians, industrialists and those who willingly ignore the power of ancestral lands and traditional knowledge.