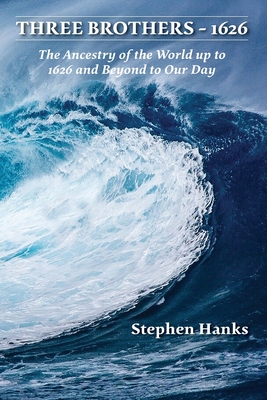 By Stephen Hanks
$19.99
Available and Ships as Soon as Possible.

Worldwide there are legends of an ancient catastrophic deluge that drowned all mankind except for a few survivors. What if you could trace the ancestry of the world, starting from that global flood all the way to the beginning of New York City in 1626 - what would the record reveal? Three Brothers - 1626 explores this question. Historical religious records states the survivors of that terrible storm were three brothers - Shem, Ham, Japheth - did they really exist? If you could trace the ancestry of these three brothers - using historical evidence, ancient writings, legends, and facts - what would history show? And what could it all say, if anything, about our future as a race?

Three Brothers - 1626 will take you on a journey that will explore the genealogy of the world, the origin of Slavery in New York and Virginia, the ancestry of the indigenous in Haiti and the Americas, the rise and fall of international world powers, what Africa and China have in common, Religion's involvement in the Slave trade, and much more, including interesting anecdotes of DNA genealogy, which is now connecting millions of people to new families and cultures that were previously unknown to them. Stephen Hanks, a long-time genealogist and specialist in African American genealogy, lives in Portland, Oregon.