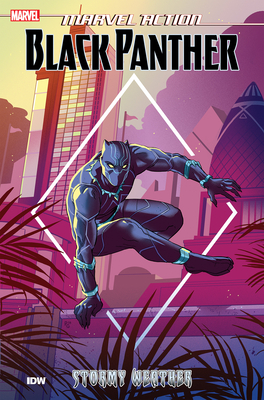 By Kyle Baker, Juan Samu (Illustrator)
$9.99
Available and Ships as Soon as Possible.

A Marvelous new era begins here! Readers can get lost in the technologically advanced African nation of Wakanda.

Follow the all-new adventures of its monarch, the Black Panther! King T'Challa is responsible for defending his people--and the world--from any threats. And he gets plenty of help--and sass--from his genius sister Shuri. With Wakanda plagued by deadly weather, Black Panther and Shuri have leaped into action to prevent their people from further suffering.

T'Challa is the king of the secretive and highly advanced African nation of Wakanda, as well as the powerful warrior known as the Black Panther. The younger sister of T'Challa, Shuri, astounds with her brilliant inventions, often providing key components to her brother's battles.

Cartoonist Kyle Baker has authored over 15 graphic novels and illustrated hundreds more in a career which extends over three decades long. His animation has appeared on MTV, Sowtime, Disney Channel and Cartoon Network. He has contributed as a writer and artist to shows such as Phineas and Ferb and Looney Tunes. His cartoons have appeared in Vibe, The New Yorker, Spin, MAD, and numerous other magazines, including countless Marvel and DC comics. Baker is the winner of 8 Eisner Awards, 4 Harvey Awards, and an Inkpot Award and Glyph Award, and others. A pioneer in the Graphic Novel format since the 1980s, works such as Nat Turner, Why I Hat Saturn, and King David helped define and evolve the medium. In addition to licensing and products, his work now expands into digital realms with new apps, streaming animation, and game design.

"Colorist David Garcia Cruz is clearly having fun bringing the world of Wakanda to life with a wide variety of shades and hues." -- ComicBook.com


"For all the excellent Black Panther titles on the stands, this stand-alone title is easily one of the most new-reader friendly. An intriguing and thrilling introduction to the world of Black Panther comic books that any reader is sure to enjoy." --Newsarama