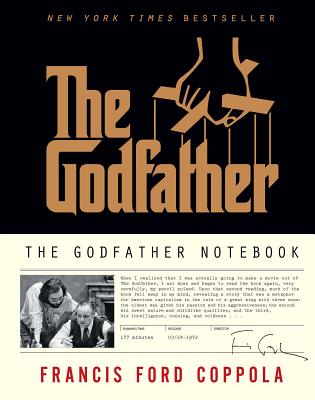 By Francis Ford Coppola
May Be Available to Order
Hard to Find. We can look into it for you. Availability not guaranteed.

THE PUBLISHING SENSATION OF THE YEAR FOR EVERY FILM FAN

The never-before-published edition of Francis Ford Coppola’s notes and annotations on The Godfather novel by Mario Puzo reveals the story behind one of the world’s most iconic films.

The most important unpublished work on one of the greatest films of all time, The Godfather, written before filming, by the man who wrote and directed it—Francis Ford Coppola, then only thirty-two years old—reveals the intense creative process that went into making this seminal film. With his meticulous notes and impressions of Mario Puzo’s novel, the notebook was referred to by Coppola daily on set while he directed the movie. The Godfather Notebook pulls back the curtain on the legendary filmmaker and the film that launched his illustrious career. Complete with an introduction by Francis Ford Coppola and exclusive photographs from on and off the set, this is a unique, beautiful, and faithful reproduction of Coppola’s original notebook.

This publication will change the way the world views the iconic film—and the process of filmmaking at large. A must-have book of the season. Nothing like it has ever been published before.

Francis Ford Coppola is a five-time Academy Award–winning writer and director, most noted for The Godfather trilogy and Apocalypse Now. His remarkable film career has spanned five decades and he is considered one of the most influential modern American filmmakers.

"When Francis Ford Coppola was preparing to shoot The Godfather, he took a razor blade to Mario Puzo's 1969 book, cut out every page, and pasted them into a notebook. Then he scribbled in the margins and underlined important passages, while slashing others. For each section he planned to film, he included notes on synopsis, texture, tone, and pitfalls to avoid. That 700-plus-page notebook has been made available for the first time in this reproduction, which includes an introduction by Coppola himself. It's a stunning document of an iconic film, and a rare behind-the-scenes look at Coppola's creative process."

"Francis Ford Coppola's The Godfather Notebook breaks down the cannoli."

"A delicious dive into film history."

"An insider's view of the film . . . The 720-page notebook depicts casting notes and a new, moving introduction by Coppola [and] . . . never-before-seen photos."

"[A] nifty document of film history . . . [that]  shows how he brought Mario Puzo’s 1969 novel to life in a film that would go on to win the Academy Award for best picture in 1973, excising whole portions of the story and highlighting what he believed was a flawed novel’s essence: a narrative of capitalism in America, as seen through the spilled blood and guts of one family."

"The Godfather Notebook [is] an exact reproduction of [Coppola's prompt book], right down to the handwriting, plus rarely seen photos."

"Legendary director Francis Ford Coppola reveals how a cinematic masterpiece came together . . . [in] a publication packed full of Coppola's original notes on the novel."

"This production diary includes . . . notes for himself and others on what he was trying to achieve in each scene, notes for actors, thoughts about all aspects of the production."