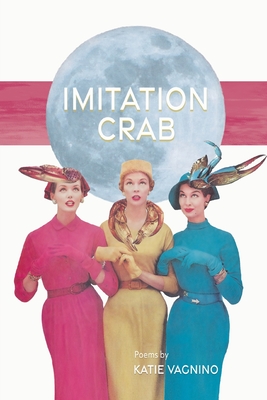 By Katie Vagnino
$23.99
Available and Ships as Soon as Possible.

Imitation Crab examines the ever-blurring boundary between the genuine and the fake in the 21st century, where reality TV shows are scripted and memoirs sometimes turn out to be completely made up. This confusion bleeds beyond pop culture into our everyday lives, where it has become increasingly difficult to differentiate performance from authentic experience. Truth is a slippery concept; as the title poem suggests, "the truth is what we make/ from the mess we inherit" and might be as phony as Monopoly money or a cheap replica in a museum gift shop.

In this virtuosic debut, Vagnino deftly crafts poems in a variety of traditional forms, but gives them a contemporary edge through her use of idiomatic language and wry humor. For example, "Junk Mail Ghazal" is a ghazal (a Persian form) comprised of spam email subject lines. Thematically, the book pays particular attention to the roles women play, and how the societal constructs of gender can be damaging. Vagnino focuses on the consequences women face when they transgress from the identities and labels they have been prescribed (i.e. mother, wife, daughter). These transgressions include sexual desire, aging ("Women at Forty" is a sly response to Donald Justice's "Men at Forty") and ambivalence toward marriage and motherhood.

For a poet invested in witty interrogations of artifice, Vagnino surprises with observations on love and loss that are tender, sincere, and funny. "How to Explain Death to Your Daughter" imagines how a parent might explain the unexplainable to a child by telling her that "death is necessary, as natural/ as sugar dissolving in a glass of lemonade/ leaving its essence to linger." The poem was featured on public transit in the Twin Cities as one of the winning selections from the Saint Paul Almanac's Impressions contest in 2017. In "Vera vs. the Butterflies," Vladimir Nabokov's widow, Vera, struggles after his death to determine what to do with the butterflies they collected together. She ultimately decides to kill them, mercifully, so they can be reunited with her husband whom she thinks will be delighted "at the sudden flutter/ of company."

Butterflies are just one of many small creatures ennobled in Vagnino's verse-oysters, weasels, fireflies, and countless other bugs and birds inhabit these poems. Vagnino grew up in Missouri, attended school on the East Coast, and now lives in Minnesota, and all three regions are colorfully brought to life in Imitation Crab, which takes the reader from the freak show at Coney Island, to the swamps of Oxford, Mississippi, to the Northwoods underbrush. Vagnino is not afraid to get a little weird; in some of these poems, banality shifts abruptly into absurdity and strangeness erupts unexpectedly, as in the realm of dreams. Dreams are the passageway between the real and the surreal, which she explores in poems like "Your Dreams Explained," where flying is "a sign of a lover's betrayal/ you are gravity, abandoned."

Dreams and art imitate life, and likewise Imitation Crab considers how the stories we tell about ourselves often exist somewhere in between truth and fiction. In the refrain of "Imitation Crab," Vagnino ponders the futility of learning to "spot a fake," and in the final couplet, seems to suggest that it's a pointless endeavor: "With practice you can tell the real from the fake/ but unless you're the crab, what difference does it make?" However, by the end of the book, it's clear that it makes a tremendous difference-for the crab and for the rest of us striving to live as authentically as we can.