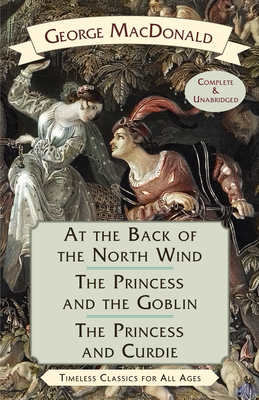 Find Out Why MacDonald is Considered a Master of Fantasies

These three most beloved classic Victorian-era fantasies of George MacDonald transport the reader to another time, real and imagined.

At the Back of the North Wind is the tale of a boy named Diamond and his adventures with the mysterious spirit force, the North Wind. This captivating story of Diamond's radiant spirit in the face of the poverty and fatal contagions of the Victorian Age has served as an inspiration for generations.

The Princess and the Goblin introduces us to Princess Irene, who lives in her father's castle near wild mountains-a land "full of hollow places underneath," where there lived a race of goblins banished by the King. Curdie, a local miner's son, is befriended by the Princess and, aided by Irene's magical great-great-grandmother, works to stop the plot by the goblins to take over the kingdom.

Author George MacDonald was a personal friend and mentor to Lewis Caroll, and also influenced the work of renowned fantasy authors C. S. Lewis, J. R. R. Tolkein, and Oz-creator Frank L. Baum. Although MacDonald explored a wide range of subjects in his varied writings, his children's classics remain the most popular, and are clearly written for the young at heart.

This book is also available from Echo Point Books in paperback, ISBN 1635619165.