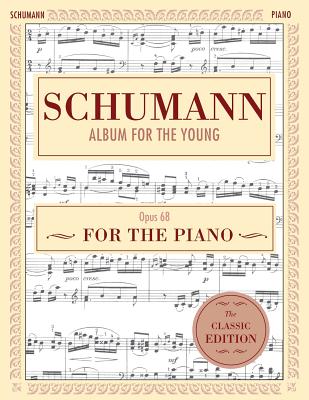 By Robert Schumann (Composer), Harold Bauer (Editor)
May Be Available to Order
Available and Ships as Soon as Possible.

From the tortured soul of Robert Schumann came the music that practically launched the Romantic Era. A firm believer in music's ability to capture and express feelings, thoughts, and emotions, Schumann poured his heart into every note he composed. The very definition of a Romantic, Schumann created a majority of his piano compositions for his beloved wife, the renowned pianist Clara Schumann. Another of his most famous pieces, Album for the Young, was composed in honor of the couple's three (a number that soon swelled to seven) children. In an era that included names like Brahms, Schubert, Wagner, and Chopin, Robert Schumann's emotionally-charged music lifted him into the pantheon of great composers. Nearly his entire catalogue is represented in this newly-reissued edition, including: - Album for the Young - Selected Works - Sonatas - Selected Masterpieces 1 & 2 - Virtuoso Music