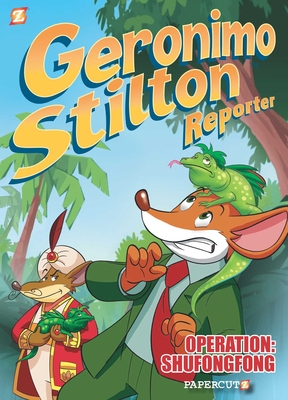 Geronimo Stilton is back in new comic stories based on the animated series, now airing on Netflix! The famous Prince Nogouda pays a visit to New Mouse City and ace reporter Geronimo Stilton has an exclusive interview. Meanwhile, at the Mouse Museum, the rare breed of Shufongfong lizards have been kidnapped! Could like Prince and his kingdom in the Bandel jungle have anything to do with this? Geronimo, Thea, Trap, and Benjamin are on the case!

Born in New Mouse City, Mouse Island, GERONIMO STILTON is Rattus Emeritus of Mousomorphic Literature and of Neo-Ratonic Comparative Philosophy. He is the director of The Rodent's Gazette, New Mouse City's most widely read daily newspaper. In 2006 he won a Nickelodeon Kids Choice Award and in 2008 he won the Cartoomics prize "Beyond Comics." His works have been published all over the globe. In his spare time, Mr. Stilton collects antique cheese rinds.

RYAN JAMPOLE is a Harvey Award nominated comic artist from Queens, New York. Ryan has drawn MEGA MAN and SONIC for Archie comics, DEXTER’S LABORATORY, and CODENAME KND for IDW and of course, SANJAY AND CRAIG for Papercutz. He also has an amazing beard.