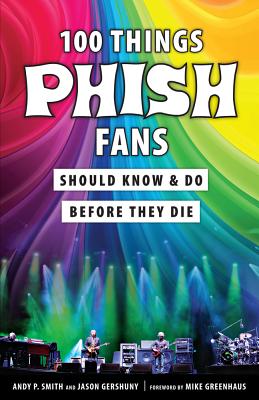 While this book is definitely geared toward new fans, fans from the 1.0 and 2.0 eras can still learn something new about their favorite band. Don't be a lizard, read this book! See you on tour!

Few music groups have been able to sustain a fan base as passionate and dedicated as that of Phish, and this entertaining guide rewards those fans with everything they need to know about the band in a one-of-a-kind format. Packed with history, trivia, lists, little-known facts, and must-do adventures that every Phish fan should undertake, it ranks each item from one to 100, providing an indispensable, engaging road map for devotees old and new.

Andy P. Smith is a writer, entrepreneur, and marketing consultant who has been attending Phish shows for more than 20 years. He is the Arts Editor at Greenpointers.com, founder of PhanSite.com, and the author of The Last American Gypsy: Chronicles of Phish Tour 2004. His writing has also appeared in JamBase.com, FreeWilliasmburg.com, Quartz, Vice, and The Village Voice, among other publications.

Over the years, he has produced content for Wieden+Kennedy, The United Colors of Benetton, MINI, PBS, and the Northside Festival. As an avid music lover and impresario, he has booked shows and DJ’d gigs all over the country, continually seeking out new sounds and music communities worldwide. He has degrees from NYU and Pratt Institute and currently lives in Brooklyn, NY, with his wife and their weird dog, Luigi. You can find him on social media at @apsmithnyc or through www.apsmith.nyc.

Jason Gershuny has photographed and written about concerts and festivals since 1999 for a variety of music news media outlets including but not limited to Jambase Magazine, Glide Magazine, and Billboard Mobile Beat. During that time he has covered a variety of festivals including High Sierra Music Festival, The Northwest String Summit, and The Portland Blues Festival. He has also reviewed and shot photographs for individual concerts such as Phish, moe., and String Cheese Incident. He has reviewed albums and interviewed various musicians such as George Porter Jr., Steve Kimock, and Karl Denson for publication.

Outside of the musical journalism realm, he was the Oregon team Leader for the national voter registration organization Headcount for more than a decade. He attended the University of Buffalo, graduated from the University of Arizona with an undergraduate degree in Sociology, and received his Master’s degree in teaching from Lewis and Clark College.

Since first seeing Phish in 1993 in a dusty fairgrounds in upstate NY, he has seen them more than 200 times. He lives with in Portland, Oregon, with his loving wife, Mindy, his precious daughter, Izabella, and his two cats, Luke and Leia. He has been a social studies teacher in a variety of grade levels for more than 15 years.