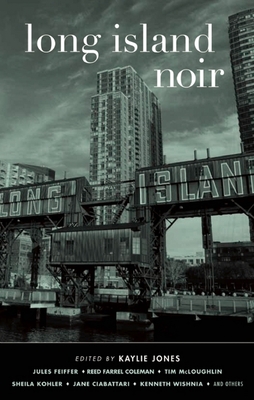 By Kaylie Jones (Editor)
$15.95
Available and Ships as Soon as Possible.

"The Shiny Car in the Night" by Nick Mamatas has been selected for inclusion in The Best American Mystery Stories 2013, edited by Otto Penzler and Lisa Scottoline

"There is plenty of mayhem for fans of dark fiction in the pages of Long Island Noir shootings, killings, all manner of brutality...Suburbia may be even meaner than the big city."
--The New York Times

"Long Island Noir is definitely a book to savor, despite the page-turner quality of the stories."
--Midwest Book Review

From the introduction by Kaylie Jones:

The Great Gatsby could be seen as the first noir novel of Long Island--a poor boy who doesn't have two cents to rub together falls for a rich girl who would never marry him. So he makes himself a massive fortune the only way he can--illegally. And buys himself a mansion on Long Island. Despite his fortune he is never truly accepted, never truly safe, comfortable, or content. And of course, she leaves him because he'll never be part of her set.

F. Scott Fitzgerald's mansions of Great Neck and Little Neck are still there, lording imposingly over their lesser neighbors. The American dream of suburban bliss has never died, only grown more desperate, more materialistic, and less romantic as it has shoved its way further east, until now there is literally nowhere left to go...The most die-hard fans of noir fiction may find a few of these stories a little gris. Not everyone here is literally down and out, though spiritually, they'll give you a run for your money...They are all characters driven by some twisted notion of the American Dream, which they feel they must achieve at any cost. This is real-life noir. These people are our neighbors.

Kaylie Jones moved to Sagaponack in 1975, where her family continued to live for more than thirty years. She is the author of five novels, including A Soldier's Daughter Never Cries, and the memoir Lies My Mother Never Told Me. She teaches in the MFA program at Stony Brook Southampton, and in the Wilkes University low-residency MFA program in professional writing.