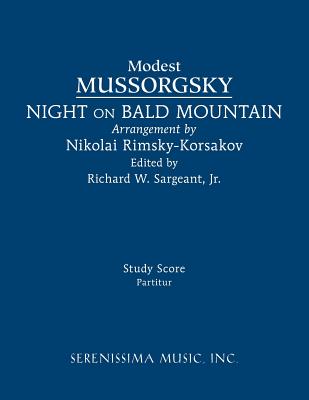 One of the first Russian tone poems, Night on Bald Mountain had its genesis in the late 1850s when Mussorgsky started sketches for a projected opera: St. John's Eve (1858), later changed to The Witch (1860) - based upon a scenario about a witches' sabbath on St. John's Eve. These were abandonded by the early 1860s but Mussorgsky contemplated a tone poem using the material featuring piano and orchestra along the lines of Liszt's Totentanz. The work was finally completed on St. John's Eve (June 23) of 1867 as an orchestral tone poem entited St. John's Eve on the Bare Mountain.

The symphonic poem was never performed in the composer's lifetime. After rejection for performance, Mussorgsky reworked the material two more times for operatic projects that never materialized. After the composer's death his friend Rimsky-Korsakov prepared a new arrangement based on the last version composed for the opera Sorochintsy Fair which was published in 1886. Rimsky's arrangement became very popular, especially after its use in the 1939 Walt Disney film Fantasia in a very bowldwerized orchestration made by Leopold Stowkowski. Rimsky's setting is the work offered here - in a newly engraved edition by Richard W. Sargeant, Jr. It is now often regarded as more of a fantasy on themes by Mussorgsky composed by Rimsky-Korsakov.