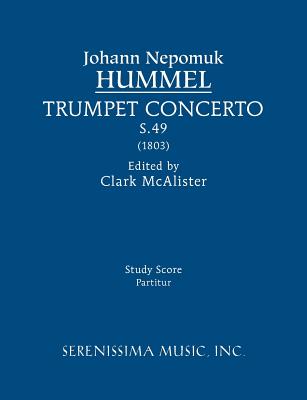 Hummel was appointed the successor to Joseph Haydn as Konzertmeister for the court orchestra of Nikolaus II, Prince Esterh zy in 1803. For the opening concert marking the new appointment, which was held on January 1, 1804, Hummel composed his three-movement concerto for trumpet with Anton Weidinger in mind, the same trumpet virtuoso for whom Haydn wrote is own famous concerto. Hummel's concerto was originally in the key of E-major, and Weidinger is believed to have modified some passages to ease performance. The piece is most often heard today transposed to E-flat major (the same as for Haydn's concerto) as performance is generally easier and considerably more effective in that key. This new study score, in E-flat major, is a reduced-format version of the newly-engraved large score edited by Clark McAlister first issued in 2012 by E.F. Kalmus.