Supers (Book One): A Little Star Past Cassiopeia (Paperback) 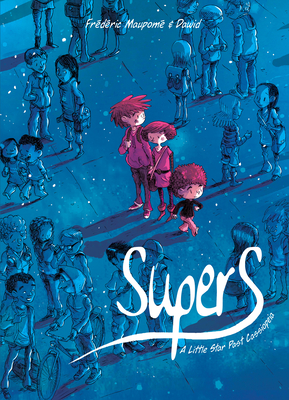 By Frédéric Maupomé, Dawid (Illustrator)
$14.99
Available and Ships as Soon as Possible.

Matt, Lily, and Benji aren't from around here. Abandoned on planet Earth, hiding far from their home, they can't even use their powers in public, for fear of being discovered. Starting at a new school is hard enough already...

Supers won the first ever Youth Award from ACBD (the French Association of Comics Critics) thanks to its rich blend of family tension, super-thrills, and classroom drama, all presented in gorgeous full-color artwork. Now it's your turn to meet these awesome immigrants. Welcome to the family!

Despite his initial calling to be a musketeer, Frédéric Maupomé studied mathematics and became a teacher. His lessons were full of princesses and superheroes, and not so full of math, so he decided to quit education to write children's books. His very first book, Pirateries, was picked by the French department of education as recommended reading. He began writing comics in 2010 with Anuki. He lives in Toulouse with his wife, their two kids, his piano, and we'll not say how many swords.

David fell into the world of comics even before he learned to read. After studying art history, he moved to Poland, where the letter V doesn't exist, so he launched his career with a funny pseudonym, Dawid. Returning to France, he joined different cartoonist workshops in Tours, producing drawings, games, and cartoons for young audiences, schoolbooks, and newspapers. His published work includes two books with Delphine Cuveele (Passe-Passe and Dessus Dessous) and the Supers series (winner of the 2016 ABCD youth prize) with Frédéric Maupomé.

“A great adventure that will delight young and old alike.” — Bande à Bulle

"Grabbing you with its action (midnight mischief, combat), its themes (teamwork, self-improvement, coming of age, friendship, love), its humor, and its freshness, Supers pleases right away…. one of the most beautiful young-fantasy comics in recent years.” — Comixtrip