And in the Vienna Woods the Trees Remain: The Heartbreaking True Story of a Family Torn Apart by War (Hardcover) 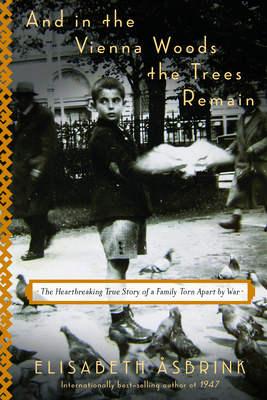 Winner of the August Prize, the story of the complicated long-distance relationship between a Jewish child and his forlorn Viennese parents after he was sent to Sweden in 1939, and the unexpected friendship the boy developed with the future founder of IKEA, a Nazi activist.

Otto Ullmann, a Jewish boy, was sent from Austria to Sweden right before the outbreak of World War II. Despite the huge Swedish resistance to Jewish refugees, thirteen-year-old Otto was granted permission to enter the country—all in accordance with the Swedish archbishop’s secret plan to save Jews on condition that they convert to Christianity. Otto found work at the Kamprad family’s farm in the province of Småland and there became close friends with Ingvar Kamprad, who would grow up to be the founder of IKEA. At the same time, however, Ingvar was actively engaged in Nazi organizations and a great supporter of the fascist Per Engdahl. Meanwhile, Otto’s parents remained trapped in Vienna, and the last letters he received were sent from Theresienstadt.

With thorough research, including personal files initiated by the predecessor to today’s Swedish Security Service (SÄPO) and more than 500 letters, Elisabeth Åsbrink illustrates how Swedish society was infused with anti-Semitism, and how families are shattered by war and asylum politics.

Elisabeth Åsbrink is a journalist and author from Sweden and previously served as the chairperson of PEN Sweden. Her book, And in the Vienna Woods the Trees Remain, received worldwide attention for revealing new information about IKEA founder Ingvar Kamprad's ties to Nazism. It won several awards, including the August Prize for Best Swedish Non-Fiction Book of the Year, the Danish-Swedish Cultural Fund Prize, and Poland's Ryszard Kapuściński Award for Literary Reportage. Åsbrink made her debut as a playwright with RÄLS, based on the minutes taken at a meeting convened by Hermann Göring in 1938, and has since written four plays.

Saskia Vogel is from Los Angeles and lives in Berlin, where she works as a writer and Swedish-to-English literary translator. Her 2019 debut novel, Permission, has been translated into four languages. She has written on themes of gender, power and the art of translation for publications such as Granta, The White Review, The Offing, and The Paris Review Daily. Her translations include work by Lina Wolff, Katrine Marçal, Karolina Ramqvist, Johannes Anyuru and the modernist eroticist Rut Hillarp.

A Kirkus Reviews Best Book of the Year

“[A] multilayered history…This devastating account has the lyricism and complexity of a finely wrought novel.” —Publishers Weekly

“Åsbrink’s historic timeline of Christianity’s long scourge-and-purge tactics against Jews is chilling, as are the parallels readers will note to today’s immigration discussions…[a] must-read.” —Booklist

“And in the Vienna Woods the Trees Remain is a gripping saga of love, friendship, betrayal, and, above all, courage—the courage of parents trapped in the Nazi inferno who yet never waver in their devotion to their son. This is one of the most moving books I have ever read about that dark period in history.” —Francine Klagsbrun, author of Lioness: Golda Meir and the Nation of Israel

“1947 is one of those books that makes you want to major in history. It is one of the best books, certainly the best nonfiction book, that I've read recently. I think the subtitle, Where Now Begins, really speaks to one of the things that makes this book so important: The echoes of 1947 are resonating very, very clearly today.” —Nancy Pearl on NPR’s Morning Edition

“A skillful and illuminating way of presenting, to wonderful effect, the cultural, political, and personal history of a year that changed the world.” —Kirkus Reviews

“Åsbrink writes sentences that make one gasp in admiration…[1947] should be read for its poetry, its insights, and the interweaving of personal and political judgments.” —Sydney Morning Herald

“This is history as a series of eclectic snapshots of events and episodes and people, from the Nuremberg Trials to the partition of India, during a year in which the world tried to redefine its hopes and come to terms with its failures: and it makes for fascinating, disquieting, lively, and often surprising reading.” —Caroline Moorehead, author of Village of Secrets

“Lucid and vivid…An outstanding work, history as it should be told.” —Salil Tripathi, Chair of the PEN International Writers in Prison Committee, and author of The Colonel Who Would Not Repent

“Åsbrink deftly brings together the tangle, the mess, the aspirations, and the disappointments which characterized the period and which for her resonate personally through her family history.” —Rosemary Ashton, author of One Hot Summer: Dickens, Darwin, Disraeli, and the Great Stink of 1858