British Columbia in Flames: Stories from a Blazing Summer (Paperback) 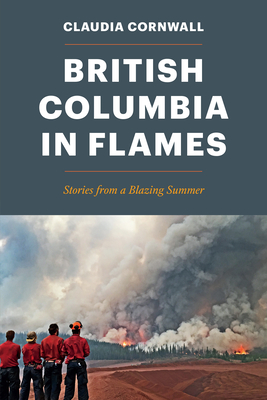 By Claudia Cornwall
$26.95
Available and Ships as Soon as Possible.

Like many British Columbians in 2017, Claudia Cornwall found herself glued to the news about the disastrous wildfires across the province. Her worry was personal: her cabin at Sheridan Lake had been in the family for sixty years and was now in danger of destruction.

Cornwall, a long-time writer, was stricken not just by her own experience, but by the many moving stories she came across about the fires--so she began collecting them. She met with people from the communities of Sheridan Lake, Ashcroft, Cache Creek, 16 Mile House, Lac La Hache, Quesnel, Williams Lake, Hanceville-Riske Creek and Clinton. She hoped to be a conduit for the voices she heard--for those who fought the fires raging around them, those who were evacuated and displaced, and those who could do nothing but watch as their homes burned. She conducted over fifty hours of interviews with ranchers, cottagers, Indigenous residents, RCMP officers, evacuees, store and resort owners, search and rescue volunteers, firefighters and local government officials.

Presented in British Columbia in Flames are stories that illustrate the importance of community. During the 2017 wildfires, people looked after strangers who had no place to go. They shared information. They helped each other rescue and shelter animals. They kept stores open day and night to supply gas, food and comfort to evacuees. This memoir, at once journalistic and deeply personal, highlights the strength with which BC communities can and will come together to face a terrifying force of nature.