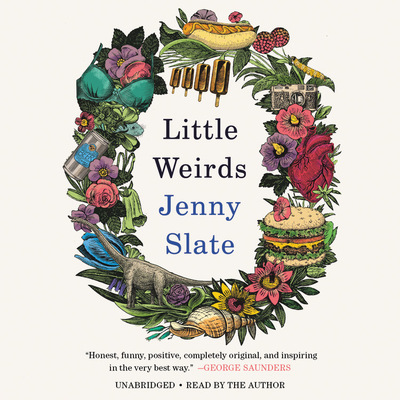 By Jenny Slate, Jenny Slate (Read by)
$35.00
Available and Ships as Soon as Possible.

“Little Weirds, a collection of essays by actress and comedian Jenny Slate, is pure magic—a joyous, thoughtful, and deeply gorgeous peek into the soul of an extremely bright and unique individual. Jenny’s mastery of the English language, the way she arranges words to tell a story, the vulnerability with which she does it, and the purity of her heart is so astounding at times that reading a paragraph once or twice is simply not enough. Little Weirds cuts deeply into what it means to be a woman here on this earth. It is about friendship and growth and learning to love ourselves in all of our tender and wild strangeness.”
— Jenna Schenk, BookTowne, Manasquan, NJ

“Little lovely weirds from the big, lovely, weirdness of Jenny Slate’s brain. I am recommending that you get both a physical copy to beautify your shelves and the audiobook so that Slate can croon her little weirds into your ears — and that way, your hands are free for snacking or petting the dog or arranging acorns on your mantle.”
— Kate Towery, Fountain Bookstore, Richmond, VA

You may "know" Jenny Slate from her Netflix special, Stage Fright, as the creator of Marcel the Shell, or as the star of "Obvious Child." But you don't really know Jenny Slate until you get bonked on the head by her absolutely singular writing style. To see the world through Jenny's eyes is to see it as though for the first time, shimmering with strangeness and possibility.

As she will remind you, we live on an ancient ball that rotates around a bigger ball made up of lights and gasses that are science gasses, not farts (don't be immature). Heartbreak, confusion, and misogyny stalk this blue-green sphere, yes, but it is also a place of wild delight and unconstrained vitality, a place where we can start living as soon as we are born, and we can be born at any time. In her dazzling, impossible-to-categorize debut, Jenny channels the pain and beauty of life in writing so fresh, so new, and so burstingly alive, we catch her vision like a fever and bring it back out into the bright day with us, where everything has changed.

Jenny Slate is an actress, stand-up comedian, and the New York Times bestselling author of the children's book Marcel The Shell with Shoes On. She has been in many movies and TV shows and also plays many cartoon animals. Jenny is a graduate of Columbia University and has a young heart and an antique soul. She lives in a 100-year-old house in the bizarre and fun city Los Angeles, where nobody ever gets old at all.

"This book is something new and wonderful--honest, funny, positive, completely original, and inspiring in the very best way: it made me remember I was alive."
—GEORGE SAUNDERS

"A man on the 2 Express Train read some of Jenny Slate's Little Weirds over my shoulder. 'What kind of book is this?' he asked. 'The best kind,' I replied."—JOHN MULANEY

"This book is like a stovetop goulash, delicious and varied ingredients,
prepared perfectly and excellent with bread...I'm sorry, I lost track of the
simile."

"Luminous,
emotional, lovely, and a little mysterious, this book is something you will
savor like a half-remembered, gorgeous dream. You'll finish it feeling like
Jenny Slate is your new best friend."

—SUSAN ORLEAN, author of THE LIBRARY BOOK and THE ORCHID THIEF

"Indescribable, but eminently readable, the actor-comedian's book consists of a carnival of observations, ideas and events that may or may not make up a memoir. Basically, Little Weirds is performance art in high-caliber prose."—THE WASHINGTON POST

"Jenny's writing is wide open, tuneful, tender. She sees the world (and feels the world) like a bug might, two antennae poking out from her head like sensory wands. Reading Little Weirds made me feel tipsy."—DURGA CHEW-BOSE,author of TOO MUCH AND NOT THE MOOD

"Slate invites us for a glorious swim inside her
imagination as she explores romance, heartbreak and self-love in this
poetry-memoir-fiction mash-up. It's a work that breaks the mold."

"At once warm, heartbreaking, and erotic...a strange, witty,
sad journey into the depths of their author's imagination...devastating in their
unfiltered honesty, even optimism...showcasing [Slate's] singular poetic forms of
expression."

"Reading Jenny Slate's Little Weirds is like digesting Shakespearean sonnets: It's different enough from ordinary English that it takes your brain a few, very-long sentences to adjust to its sweet, flowery prose. But once you've recalibrated, the actress/comedian's book becomes a dreamy dessert for the eyeballs that uses playful language to express deep sentiments about heartbreak, anger, wonder and friendship."—USA TODAY

"A poetic and dreamlike book, a testament to the
power of fantasy and language to hit your feelings where facts and pictures
can't. . .Slate's
voice never loses its capacity for strangeness, for finding it in the littlest,
weirdest corners. And it's this mix of sweet and sadness, real stakes and
dreamy prose, that gives this book its soft, sharp, and altogether overwhelming
power. Like René Magritte crossed with Lana Del Rey, with strong notes of
Patricia Lockwood. Like a carnival ride caught in a tornado, candy-colored
shards of metal sparkling in the sky."

"If you hadn't previously been aware of Slate's dexterity as a storyteller, [Little Weirds] will be your awakening...The thing about Jenny Slate is that her warmth doesn't just come from her openness. It also comes from her ability to say, with her whole chest, something others would keep hushed away. It's why she's the receptacle of the stories people are normally too embarrassed to tell. When someone articulates so clearly her own hopes and worries and small shames, it feels like an opening to share your own in return."—IN STYLE

"The inside of Jenny Slate's mind is a fascinating, if unusual, place.
In this collage of essays, stories, dreams (both night and day), and pieces
that defy easy categorization, the actor and comedian invites readers to pay an
extended visit, one that will leave them enlightened, moved and sometimes
pleasantly puzzled... a refreshing, original journey."

"Jenny Slate, the polymathic actress, writer and
comic, presents a delightfully odd assemblage of vignettes whose
magical-realist absurdity is a style all her own."

"Across pieces that vary in tone and style, a
vulnerable account of losing love and wanting desperately to re-find it emerges. . . This unconventional collection gives true
insight into Slate as both an artist and a person."

"Every so often, someone will decide to stray from the outline and gift us with something so unexpected that it may not tickle our funny bone but it might tickle us pink. Jenny Slate's nonfiction collection Little Weirds is one such book. It's an extremely personal narrative, and there are elements of humor in it, but that may be all it has in common with the efforts of her peers. . . A collection that relies so heavily on whimsy shouldn't be this effective, but the emotions in it are so raw that delving into her words creates an intimate connection to the work."—AV CLUB

"A collection of not quite stories and not quite essays
that are somehow more than both...Holding the book together is Slate's intelligence
and eye for the absurd, which is to say her voice... pure joy for her subtlety,
sensitivity, and comic timing...Few books explore self-doubt and loneliness with
as much fun or creativity...Jenny Slate very much a writer."

"Humorous, whimsical essays about things that are on Jenny
Slate's mind. With a light touch, she tells us honestly what it's like to be
her and how she sees the world, one little, weird piece of it at a time."

"Jenny Slate is an artist in the broadest sense of
the word. . . . Adjust your expectation of a run-of-the-mill memoir and ready
yourself to drop straight into Slate's imagination. Her ability to paint a
meticulous mental picture with nothing but words on a page can only be
described as gifted."

"Slate offers an intimate window into not only her
mind, but her heart. The result is a dazzling, sensory gift for poetry lovers
and fans of Slate's distinctly odd, but deeply charming humor."

"Little Weirds explores the oddities-and magic-of everyday life...Less an essay collection and more a map of her brain...Little Weirds chattily chronicles Slate's highs and lows and dips and swoops as if the actress is absorbing sunshine through an I.V."
—MARIE CLAIRE

"The mind that made you
fall in love with a tiny shell hang-gliding on a Dorito does similarly strange,
albeit more grown-up work in this collection of essays, which touches on
everything from haunted houses to a vagina singing sad old songs."

"Slate's voice remains an eccentric and
powerful central force as she comments on politics, patriarchy and her personal
life."

"She can act! She can do stand-up! And yes: Jenny Slate can write, too. Slate gets vulnerable in Little Weirds, a memoir that touches on her first marriage, her post-election anxiety, and new beginnings."—REFINERY29

"A delight to read. It's a collection of
beautiful, hilarious, genuine essays and really is meant for times when you
feel heavy. Slate jumps between deeply considering a dead deer on her parents
property, to transcribing her borderline surrealist dreams, to poignantly
investigating heartache and the forms it takes in such a genuine way I couldn't
help but feel that it was written by a friend for me."

"Slate seems to fit so comfortably inside the poetic
realms of her impressive imagination that she has no need to abandon them,
not even when she is rebuking the pernicious ugliness of male
patriarchy, another element that has heavily impacted her life. In one
particularly powerful interlude, the author achieves biblical grandeur, envisioning
herself ripping out the ancient evil root and stem...A uniquely talented
writer and performer offers up an unexpectedly uncommon approach to
autobiographical writing."

"Slate got what most major comedians get -- a book deal
-- and the result is wholly original and uniquely hers...She writes in this lyrical,
musical, even poetic way. The guardedness typical of the comedian memoir is
thus gloriously stripped away... She manages to be whimsical but hilarious but
vulnerable."

"The stand-up comedian and actress
dips into every nook and cranny of her mind to bring forth original, funny,
tender, and above all, magical observations about life."

"Jenny Slate is a little weird (in a very good way). Her aptly named collection of personal essays, Little Weirds, gives readers a glimpse into her strangely funny and tender, magically delicious mind...Slate's writing style is deeply personal, yet her prose is crisp to the taste."—AMAZON, Editor's Choice

"Little Weirds isn't the typical comedian's memoir, but it's the rare work of art that's somehow both delightfully bizarre and totally universal."—BUST MAGAZINE