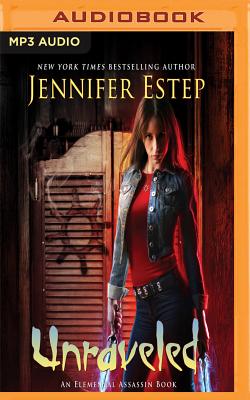 By Jennifer Estep, Lauren Fortgang (Read by)
$9.99
Email or call for price.

After the shocking revelations of the previous book, Bitter Bite, the world of Ashland's become even more sinister, and Gin Blanco (aka Ashland's most fearsome assassin, the Spider) no longer knows whom - or what - she can count on. Only one thing is for certain: Danger and new enemies await Gin in Unraveled, book 15 in the New York Times best-selling Elemental Assassin urban fantasy series that RT Book Reviews calls "unbeatable entertainment "

What could go wrong when you're trying to unravel a decades-old conspiracy?

As the current queen of the Ashland underworld, you would think that I, Gin Blanco, would know all about some secret society controlling things from behind the scenes. I might be the Spider, the city's most fearsome assassin, but all my Ice and Stone elemental magic hasn't done me a lick of good in learning more about the Circle. Despite my continued investigations, the trail's gone as cold as the coming winter.

So when Finnegan Lane, my foster brother, gets word of a surprising inheritance, we figure, why not skip town for someplace less dangerous for a few days? That place: Bullet Pointe, a fancy hotel resort complex plus Old West theme park that Finn now owns lock, stock, and barrel. At first all the struttin' cowboys and sassy saloon girls are just hokey fun. But add in some shady coincidences and Circle assassins lurking all around, and vacationing becomes wilder - and deadlier - than any of us expected.

Good thing this assassin brought plenty of knives to the gunfight....