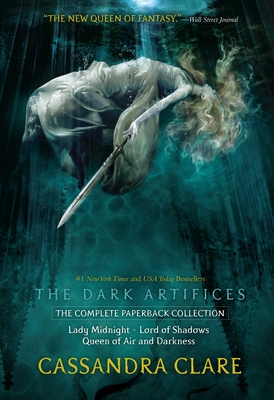 All three books in the #1 New York Times and USA TODAY bestselling Dark Artifices trilogy are now available together in a collectible paperback boxed set. The Dark Artifices is a sequel series to the internationally bestselling Mortal Instruments series.

Emma Carstairs is a Shadowhunter—the best in her generation. Together with her best friend and warrior partner Julian Blackthorn, she patrols the streets of Los Angeles, where faeries—the most powerful of supernatural creatures—teeter on the edge of open war with Shadowhunters. But when bodies of murdered humans and faeries continue to turn up, Emma and Julian must strike an uneasy alliance with their supposed enemies in order to find the killer.

Meanwhile, an extremist faction of Shadowhunters called the Cohort will do anything to seize power and turn Shadowhunters against Downworlders once and for all. Emma, Julian, and their friends must embark on a series of quests from the Sunset Strip to the enchanted sea that pounds the beaches of Santa Monica, and deep into the realms of Faerie and beyond in order to save the Shadow World as they know it—even as a deadly and ancient curse threatens to destroy them and everyone they love.

Cassandra Clare is the author of the #1 New York Times, USA TODAY, Wall Street Journal, and Publishers Weekly bestselling Shadowhunter Chronicles. She is also the coauthor of the bestselling fantasy series Magisterium with Holly Black. The Shadowhunter Chronicles have been adapted as both a major motion picture and a television series. Her books have more than fifty million copies in print worldwide and have been translated into more than thirty-five languages. Cassandra lives in western Massachusetts with her husband and three fearsome cats. Visit her at CassandraClare.com. Learn more about the world of the Shadowhunters at Shadowhunters.com.