Soundbreaking: Stories from the Cutting Edge of Recorded Music (Hardcover) 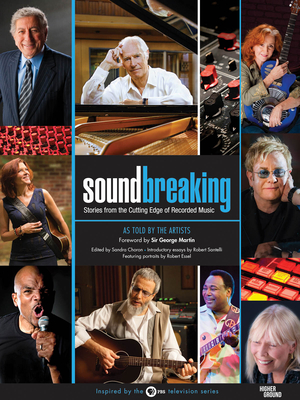 By Robert Santelli (Contribution by), Sir George Martin (Foreword by), Sandra Choron (Editor)
$39.95
Available and Ships as Soon as Possible.

Charting a century's worth of innovation and experimentation in the creation of music, Soundbreaking offers a behind-the-scenes look at the birth of new sounds--and features original interviews with twenty-one of the most celebrated artists, producers, and music industry pioneers of our time. This book was inspired by the eight-part Grammy- and Emmy-nominated film series Soundbreaking: Stories from the Cutting Edge of Recorded Music, one of the most wide-ranging series on the art of music recording and the last project of the late legendary music producer Sir George Martin. Featuring a special foreword by Sir George Martin and original artist profiles by Grammy Museum founding executive director Robert Santelli, Soundbreaking highlights twenty-one artists from across eras and a wide spectrum of genres. In intimate interviews, these music legends share their personal insights in passages from longer interviews conducted between 2008 and 2015: Sir George Martin, Les Paul, Pete Seeger, Tony Bennett, Frankie Valli, Smokey Robinson, Ringo Starr, Paul McCartney, George Benson, Joni Mitchell, Michael Tilson Thomas, Eric Clapton, Elton John, Yusuf/Cat Stevens, Mark Knopfler, Bonnie Raitt, Tom Petty, Steven Van Zandt, Rosanne Cash, Sheila E., and Darryl McDaniels. The excerpts point to themes that emerge and echo throughout: the importance of varied cultural influences on music careers, the role of technology innovation in the creative process, and most commonly, the human connection to music. "Music is the only common thread and universal language that binds us together regardless of race, nationality, age, or income. And recorded music is how we experience it and what makes it accessible." --Sir George Martin.

Artist profiles written by Robert Santelli, Grammy Museum founding executive director and former CEO/artistic director of the Experience Music Project. The Soundbreaking entertainment brand was founded by David H. Langstaff and a small group of music lovers to produce the Soundbreaking project with Sir George Martin. Soundbreaking aims to educate audiences on the relatively brief history of sound recording--just over one hundred years--which is one of the most important stories of the twentieth century. The original concept was created by Maxim Langstaff for Wildheart Entertainment.