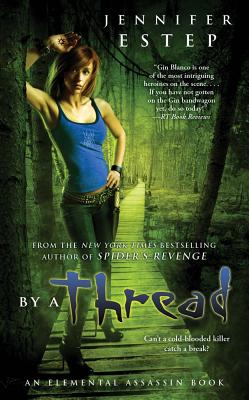 By Jennifer Estep
$9.99
Available and Ships as Soon as Possible.

This is book number 6 in the Elemental Assassin series.

The sixth book in the USA TODAY bestselling Elemental Assassin urban fantasy series featuring Gin Blanco, who by day owns a Tennessee BBQ joint, and by night is a tough female assassin known as the Spider.

I never thought I’d need a vacation from being an assassin….

My name is Gin Blanco, and I’m the assassin the Spider. All the Ashland’s lowlifes are gunning for me and trying to make a name for themselves by taking out the Spider. So I think it’s a good idea to get out of Ashland for a while until things cool down.

So I’m headed south to a swanky beach town, along with my baby sister, Bria, for a weekend of fun in the sun. But when an old friend of Bria’s is threatened by a powerful vampire with deadly elemental magic, it looks like I’ll have to dig my silverstone knives out of my suitcase after all. But this time, not even my own Ice and Stone power may be enough to save me from coming home in a pine box…

“Gin Blanco is one of the most intriguing heroines on the scene. . . . If you have not gotten on the Gin bandwagon yet, do so today!” —RT Book Reviews

“This series kicked off with a bang, and the action hasn’t let up since.” —Fresh Fiction