From Enforcers to Guardians: A Public Health Primer on Ending Police Violence (Hardcover) 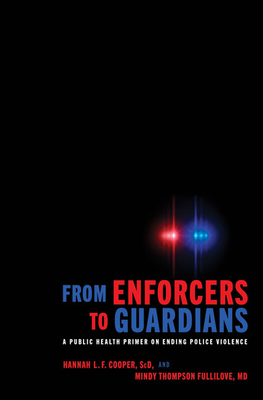 Most public discourse about excessive police violence focuses, understandably, on the horrors of civilian deaths. In From Enforcers to Guardians, Hannah L. F. Cooper and Mindy Thompson Fullilove approach the issue from a radically different angle: as a public health problem. By using a public health framing, this book challenges readers to recognize that the suffering created by excessive police violence extends far outside of death to include sexual, psychological, neglectful, and nonfatal physical violence as well.

Arguing that excessive police violence has been deliberately used to marginalize working-class and minority communities, Cooper and Fullilove describe what we know about the history, distribution, and health impacts of police violence, from slave patrols in colonial times to war on drugs policing in the present-day United States. Finally, the book surveys efforts, including Barack Obama's 2015 creation of the Task Force on 21st Century Policing, to eliminate police violence, and proposes a multisystem, multilevel strategy to end marginality and police violence and to achieve guardian policing.

Hannah L. F. Cooper, ScD is a professor within Emory University's Rollins School of Public Health, where she holds the Rollins Chair in Substance Use Disorders Research. Mindy Thompson Fullilove, MD is a professor of urban policy and health at The New School. She is the author of Urban Alchemy: Restoring Joy in America's Sorted-Out Cities.