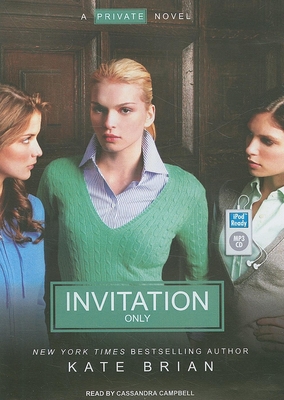 By Kate Brian, Cassandra Campbell (Narrated by)
May Be Available to Order
Out of Print. We can look into it for you. Availability not guaranteed.

This is book number 2 in the Private series.

Reed Brennan's future is looking as bright as the two-karat diamonds in her new housemates' ears. Being accepted to the most prestigious private boarding school in the country wasn't enough for Reed. She had to break every rule to do it, but she has accomplished the impossible: Reed is a Billings Girl now. And with her new status come respect, envy, and, most important, opportunity. Not to mention the parties. Unfortunately, at the next illicit party in the Easton campus woods, her roommate snaps some pictures of Reed in more than one compromising position. She uses the photos to blackmail Reed: Dig up dirt on the most powerful and popular Billings Girls or she will have Reed expelled. And speaking of parties, the Legacy is coming up. It's the invitation-only Halloween party in New York City, and it's rumored that Thomas-Reed's MIA boyfriend-will be making an appearance there. Too bad Reed isn't even close to invited. Life as a Billings Girl is every bit as glamorous as Reed imagined. What she didn't bargain for is the tangled web of private lies these girls weave.

Kieran Scott writes under the pen name Kate Brian, whose best-known books are "The Princess and the Pauper," "Megan Meade's Guide to the McGowan Boys," "Fake Boyfriend," and the bestselling Private series.