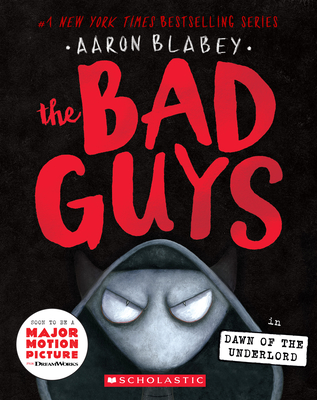 By Aaron Blabey
$6.99
Available and Ships as Soon as Possible.

This is book number 11 in the The Bad Guys series.

SOON TO BE A MAJOR MOTION PICTURE!"I wish I'd had these books as a kid. Hilarious!" -- Dav Pilkey, creator of Captain Underpants and Dog ManThey may look like Bad Guys, but these wannabe heroes are doing good deeds... whether you like it or not! This New York Times bestselling illustrated series is perfect for fans of Dog Man and Captain UnderpantsThe Bad Guys - sorry, Shadow Squad-G - have finally saved the world from butt-handed evil. And now it's time to celebrate! But when one member of the team makes a shocking discovery, the party might be over sooner than everyone thinks...

Aaron Blabey has written many well-loved, bestselling books for children. He is the creator of three hugely successful series for children -- the New York Times bestselling The Bad Guys, Pig the Pug, and Thelma the Unicorn. In 2018, it was announced that a movie adaptation of The Bad Guys is in development at DreamWorks Animation with Aaron serving as an executive producer on the project. Aaron's books have won many awards, including nine REAL Awards, an INDIE Book Award for Children's Book of the Year, a Children's Book Council of Australia -- Book of the Year Award, a NSW Premiers Literary Award for Children's Literature, two Australian Book Design Awards, and a Children's Peace Literature Award.

Praise for The Bad Guys:* "This book instantly joins the classic ranks of Captain Underpants and The Stinky Cheese Man. We challenge anyone to read this and keep a straight face." -- Kirkus Reviews, starred review* "Guaranteed to be a hit for chapter book readers looking for humor and action." -- School Library Journal, starred review

Praise for The Bad Guys:* "This book instantly joins the classic ranks of Captain Underpants and The Stinky Cheese Man. We challenge anyone to read this and keep a straight face." -- Kirkus Reviews, starred review* "Guaranteed to be a hit for chapter book readers looking for humor and action." -- School Library Journal, starred review