The Club: How the English Premier League Became the Wildest, Richest, Most Disruptive Force in Sports (Hardcover) 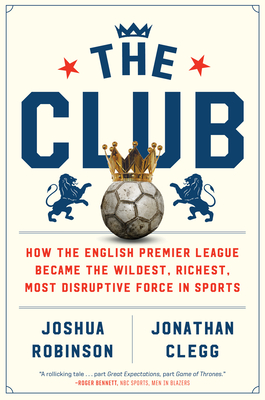 By Joshua Robinson, Jonathan Clegg
May Be Available to Order
Out of Print. We can look into it for you. Availability not guaranteed.

The Club is the previously untold inside story of how English soccer’s Premier League became the wildest, richest, most popular sports product on the planet.

This is a sports and business tale of how money, ambition, and twenty-five years of drama remade an ancient institution into a twenty-first-century entertainment empire. No one knew it when their experiment began, but without any particular genius or acumen, the motley cast of billionaires and hucksters behind the modern Premier League struck gold.

Pretty soon, everyone wanted to try their luck, from Russian oligarchs to Emirati sheikhs, American tycoons, and Asian Tiger titans. Some succeeded beyond their wildest dreams. Some lost everything. Today, players are sold for tens of millions, clubs are valued in the billions, and games are beamed out to nearly two hundred countries, all while the league struggles to preserve its English soul.

Deeply researched and drawing on one hundred exclusive interviews, including the key decision makers at every major English team, The Club is the definitive and wildly entertaining narrative of how the Premier League took over the world.

Joshua Robinson is the European sports correspondent for The Wall Street Journal, and has written for the New York Times, the Washington Post and Sports Illustrated.

Jonathan Clegg is a senior editor for The Wall Street Journal. His work has also appeared in the Daily Telegraph, the Independent (U.K.), and FourFourTwo magazine.

"The transformation of the English Premier League, from the muddy pitches, primitive tactics, and unglamorous pub culture of its early days to the coveted, lavish, global colossus we now know and love is a rollicking tale.  Robinson and Clegg delight in every detail of that evolution from backwater to behemoth, spinning a narrative that is part Great Expectations, part Game of Thrones, in equal measure."  —Roger Bennett, NBC Sports, Men in Blazers

“The Club is a richly detailed, remarkably told story of how the Premier League became the unstoppable force that it is today. Joshua and Jonathan provide unparalleled access to the people who make the league go, from the owners to the managers to the stars on the field. The Club is the definitive guide to the definitive league in sports.” –Billy Beane, Vice President for Baseball Operations, Oakland A’s

"Clegg and Robinson are expert storytellers in unspooling the narrative of one of Britain's most successful exports, illustrating the creative tensions between owners that made it possible. The work is at once thorough but also readable and entertaining, with protagonists presented as real live characters, rather than faceless suits: a testament to their reporting and writing skills." –Gabriele Marcotti, ESPN

“Not even thirty years ago, supporting an English soccer club meant risking life and limb to stand among brawling hordes on damp terraces, choking down a halftime cup of Bovril, and doing your best to never, ever enter the bathrooms.  Joshua Robinson and Jonathan Clegg put readers in a padded boardroom seat next to the impresarios, visionaries, and hucksters – and, later, the oligarchs, sheiks, and hedge fund tycoons – who transformed a motley collection of unprofitable clubs into the international king of all sports leagues.  The Club is an antic and definitive account of all that has been gained – and lost – along the way with the improbable ascent of the Premier League – quality, money, power, money, non-vomitous toilets, money – as well as all that’s been lost.” –Ben Reiter, bestselling author of Astroball

"A fascinating and necessary investigation into the forces that led to the creation of the Premier League. Meticulous in its research." –Jonathan Wilson, author of Inverting the Pyramid