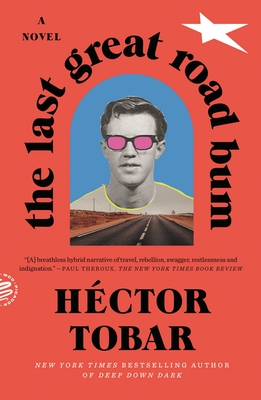 By Héctor Tobar
$18.00
Not Yet Published

In The Last Great Road Bum, Héctor Tobar turns the peripatetic true story of a naive son of Urbana, Illinois, who died fighting with guerrillas in El Salvador into the great American novel for our times.

Joe Sanderson died in pursuit of a life worth writing about. He was, in his words, a “road bum,” an adventurer and a storyteller, belonging to no place, people, or set of ideas. He was born into a childhood of middle-class contentment in Urbana, Illinois and died fighting with guerillas in Central America. With these facts, acclaimed novelist and journalist Héctor Tobar set out to write what would become The Last Great Road Bum.

A decade ago, Tobar came into possession of the personal writings of the late Joe Sanderson, which chart Sanderson’s freewheeling course across the known world, from Illinois to Jamaica, to Vietnam, to Nigeria, to El Salvador—a life determinedly an adventure, ending in unlikely, anonymous heroism.

The Last Great Road Bum is the great American novel Joe Sanderson never could have written, but did truly live—a fascinating, timely hybrid of fiction and nonfiction that only a master of both like Héctor Tobar could pull off.

Héctor Tobar is a Pulitzer Prize–winning journalist and novelist. He is the author of the critically acclaimed, New York Times bestseller, Deep Down Dark, as well as The Barbarian Nurseries, Translation Nation, and The Tattooed Soldier. Héctor is also a contributing writer for the New York Times opinion pages and an associate professor at the University of California, Irvine. He's written for The New Yorker, The Los Angeles Times and other publications. His short fiction has appeared in Best American Short Stories, L.A. Noir, Zyzzyva, and Slate. The son of Guatemalan immigrants, he is a native of Los Angeles, where he lives with his family.

“[A] hybrid narrative of travel, rebellion, swagger, restlessness and indignation... Some younger writers and readers may not realize how big a pile of yellowing paper a life of writing could amount to in a world before computers and random-access memory. In Joe Sanderson’s case it was monumental, an enormous task to sort through, and Tobar became a ruminative Rumpelstiltskin, spinning this straw into gold.” —Paul Theroux, The New York Times Book Review

“A remarkably juicy true story… [Joe Sanderson’s] death - at age 39 - should be tragic and terrible, yet in Mr. Tobar’s hands it reads like a triumphant arrival.” —Sam Sacks, The Wall Street Journal

“While Joe is collecting material for his unwritten novel and attempting to find a suitable voice, he is also engaged in a process that Tobar considers far more important, especially in our bewildering present moment, when writing often seems to be entirely about the privilege of self-discovery. Joe is beginning to discover not just the relationship between the world and his aesthetic impulses, but also the bloody, vital interplay between writing, politics, and the world, with the ensuing dialectic of failure and hope that forms the subject of Tobar’s own novel . . . Tobar’s flawed and human hero stands out with surprising clarity.” —Siddhartha Deb, The New Republic

“A sweeping story of an innocent abroad...The writing is...immersive...The authority, the sense of place, the keen eye for detail...it’s nearly impossible to tell where the line between fiction and non begins and ends. No matter. One of the book’s pleasures is that the line is gleefully crossed...The cross-cultural connection is the book’s greatest achievement… The Last Great Road Bum does what every American novel, great or otherwise, ought to do - it broadens our understanding of America.” —Robert Rea, The Southwest Review

“A very different type of road narrative . . . Tobar granted Sanderson, perennially viewed as an outsider what eludes so many journeying narratives: a sense of belonging."—Connor Goodwin, The Atlantic

“Héctor Tobar uses every method at his disposal to encircle the facts of the ‘conspicuous gringo’ whose archive landed in his lap. I’m in awe of the results, an alchemical amalgam of tender portraiture and illuminating context, with a voice full of riffs and references, and charming as hell. Tobar can seemingly do anything as a writer; here he bridges fiction and nonfiction effortlessly.” —Jonathan Lethem

“Tobar’s stunning follow-up to Deep Down Dark draws from the unbelievable true story of Joe Sanderson, a peripatetic would-be-writer who left a comfortable existence in Urbana, Ill., in order to travel the world in search of material for a great American novel. Instead, he found romance, danger, and the dark heart of the mid-20th century...Tobar brilliantly succeeds in capturing Joe’s guileless yearning for adventure through high-velocity prose that is both relentless and wry.” —Publishers Weekly, starred review

“The vividly realized particulars of [Joe Sanderson's] restless journeys are offered in Tobar's remarkable novelization of Sanderson's real life, his adventures and misadventures.... His life itself has inspired what is inarguably a great novel, a tribute to him that is beautifully written and spectacularly imagined. Tobar writes that it took him 11 years to complete this wonderful book. Readers will rejoice that he persisted.”
—Booklist, starred review


“I admire everything [Tobar] does. He’s an embodiment of the stature of California writing, California thinking, and what I like to think of as the California diaspora, which is a double lens, involving not just those who are from here but also those who come here. It’s a tension that drives the state itself, and it sits at the center of Tobar’s work.” —David Ulin, Alta

“Part fact, part fiction, The Last Great Road Bum follows the wild, peripatetic life of Joe Sanderson, who dropped out of college in the ’60s to hitchhike across the globe, visiting, by his estimate, 70 to 80 different countries throughout his short life. Traveling from Jamaica to Vietnam to Nigeria, Sanderson would ultimately die fighting with the guerrillas in the civil war in El Salvador. Inspired by writers like Thoreau and Hemingway, Sanderson wrote prolifically, leaving behind a significant archive of letters, notebooks, and journals, which Tobar used to write the Great American Novel that Sanderson himself could not.” —The AV Club


“The speed and respect and sensitivity with which Tobar can encapsulate a life is dazzling...The novel muses on who gets to tell stories as it probes the lines between myth and reality. This is first rate storytelling from a writer who deepens the sky with every book he writes.” —John Freeman, Lit Hub Summer Preview

"One of my favorite aspects of the book is Tobar’s self-awareness of being a Brown author writing from the perspective of a white man. Tobar even imagines Sanderson’s commentary on his narrative, with humorous footnotes." —Bobby Hundreds, author of This is Not a T-Shirt

Praise for Héctor Tobar
“A riveting story...[but] why it’s an extraordinary book is because of Héctor Tobar’s writing, which is so beautiful and so thoughtful that he’s taking on all of the big issues of life: what is life worth, what is the value of one human life, what is faith, who do we become in our darkest hour? He really brings this story to a level that I don’t feel anyone else could have done . . . It’s the best book of the year.” —Ann Patchett, NPR’s Morning Edition on Deep Down Dark

“[Tobar] succeeds in bringing into focus both the civil turmoil that racks Guatemala and the inner turmoil that can consume people anywhere.” —People, on The Tattooed Soldier

“[Tobar] exhibits a seismographic sensitivity to the tensions along the fault lines of his cultural terrain . . . His illuminations become our recognitions.” —Rebecca Donner, The New York Times Book Review, on Barbarian Nurseries