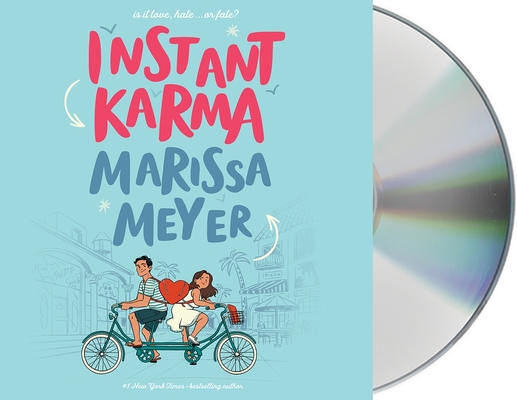 By Marissa Meyer, Rebecca Soler (Read by)
May Be Available to Order
Limited Availability. We can look into it for you. Availability not guaranteed.

“This is a delightful YA contemporary romance with a touch of magic and a deep dive into environmental issues that impact the ocean and its animals. Prudence is an overachiever who has not yet found a cause that she can throw herself into. Her nemesis, Quint, is an underachiever whose mom owns a rescue center for hurt sea life. Sparks fly and wills clash as these two go from fighting each other to fighting for each other and the ocean they both love. Throw in a little bit of karma and you have a fun read.”
— Cara Dyne-Gores, Joseph-Beth Booksellers, Cincinnati, OH

In New York Times bestselling author Marissa Meyer's young adult contemporary romance, a girl is suddenly gifted with the ability to cast instant karma on those around her – both good and bad.

Chronic overachiever Prudence Daniels is always quick to cast judgment on the lazy, rude, and arrogant residents of her coastal town. Her dreams of karmic justice are fulfilled when, after a night out with her friends, she wakes up with the sudden ability to cast instant karma on those around her.

Pru giddily makes use of the power, punishing everyone from public vandals to mean gossips, but there is one person on whom her powers consistently backfire: Quint Erickson, her slacker of a lab partner. Quint is annoyingly cute and impressively noble, especially when it comes to his work with the rescue center for local sea animals.

When Pru resigns herself to working at the rescue center for extra credit, she begins to uncover truths about baby otters, environmental upheaval, and romantic crossed signals—not necessarily in that order. Her newfound karmic insights reveal how thin the line is between virtue and vanity, generosity and greed . . . love and hate… and fate.

Marissa Meyer is the #1 New York Times–bestselling author of the Renegades Trilogy, The Lunar Chronicles series, the Wires and Nerve graphic novels, and The Lunar Chronicles Coloring Book. Her first standalone novel, Heartless, was also a #1 New York Times bestseller. Marissa created and hosts a podcast called The Happy Writer. She lives in Tacoma, Washington, with her husband and their two daughters.

Rebecca Soler is a film and voiceover actress who won a 2009 AudioFile Earphones Award for her narration of After by Amy Efaw. Her audiobook credits include work by authors such as Judy Blume, James Patterson and Sarah Dessen. Soler has also narrated the popular young adult series The Lunar Chronicles by Marissa Meyer. Her voice over credits include various video games, like Star Wars: The Old Republic and Red Dead Redemption and television shows such as Pokemon, Yu-Gi-Oh, and Teenage Mutant Ninja Turtles. She lives in New York City.