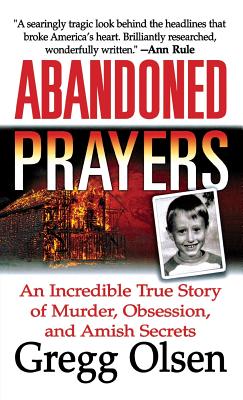 By Gregg Olsen
$26.99
Available and Ships as Soon as Possible.

On Christmas Eve in 1985, a hunter found a young boy's body along an icy corn field in Nebraska. The residents of Chester, Nebraska buried him as "Little Boy Blue," unclaimed and unidentified-- until a phone call from Ohio two years later led authorities to Eli Stutzman, the boy's father.

Eli Stutzman, the son of an Amish bishop, was by all appearances a dedicated farmer and family man in the country's strictest religious sect. But behind his quiet fa ade was a man involved with pornography, sadomasochism, and drugs. After the suspicious death of his pregnant wife, Stutzman took his preschool-age son, Danny, and hit the road on a sexual odyssey ending with his conviction for murder. But the mystery of Eli Stutzman and the fate of his son didn't end on the barren Nebraska plains. It was just beginning. . .

Gregg Olsen has been a journalist and investigative author for more than twenty years. He is the recipient of numerous writing, editing, and photojournalism awards, including citations of excellence from the Society of Professional Journalists (Sigma Delta Chi), the International Association of Business Communicators, Washington Press Association, Society of Technical Communication, and the Public Relations Society of America.A resident of Washington state, Olsen has been a guest on dozens of national and local television shows, including educational programs for the History Channel, Learning Channel, and the Discovery Channel. Olsen also appeared several times on CBS's 48 Hours, MSNBC's Special Edition, Entertainment Tonight, Sally Jesse Raphael, Inside Edition, and Extra. He has been featured in USA Today, Salon Magazine, Seattle Times, and the New York Post.