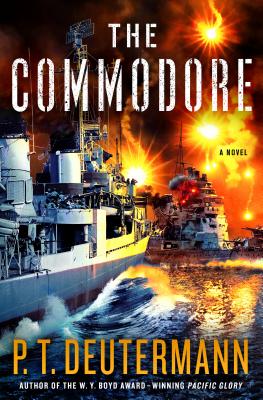 By P. T. Deutermann
$34.99
Available and Ships as Soon as Possible.

P. T. Deutermann's previous novels of the US Navy in World War II - Pacific Glory, Ghosts of Bungo Suido, and Sentinels of Fire - have been acclaimed by reviewers and readers for their powerful drama and authentic detail.

In The Commodore, the Navy in 1942-1943 is fighting a losing battle against Japan for control of the Solomon Islands. Vice Admiral William "Bull" Halsey is tasked to change the course of the war. Halsey, a maverick, goes on the offensive and appoints a host of new destroyer commanders, including a wild-card named Harmon Wolf. An American Indian from a Minnesota reservation, Wolf has never fit in with the traditional Navy officer corps. But under Halsey, Wolf's aggressive tactics and gambling nature bring immediate results, and he is swiftly promoted to Commodore of an entire destroyer squadron.

What happens next will change Wolf's life, career, and the fate of his ships forever. An epic story of courage, disaster, survival, and triumph that culminates in the pivotal battle of Vela Gulf, The Commodore is a masterful novel of an unlikely military hero.

P. T. DEUTERMANN is the author of many previous novels including Pacific Glory, which won the W. Y. Boyd Literary Award for Excellence in Military Fiction. Deutermann spent twenty-six years in military and government service, as a captain in the Navy and in the Joint Chiefs of Staff as an arms-control specialist. He lives with his wife in North Carolina.

"Fans of military action thrillers will race through the pages and finish the book wanting more." --Publishers Weekly (starred review)

"[Deutermann's] experience and his deep knowledge of WWII naval warfare illuminate every page...The Commodore is a top-shelf naval adventure." --Booklist