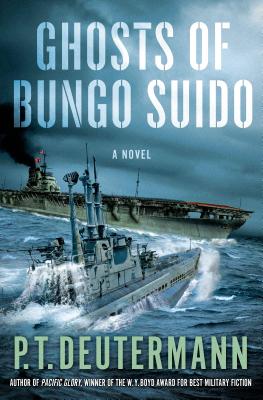 By P. T. Deutermann
May Be Available to Order
Out of Print. We can look into it for you. Availability not guaranteed.

A thrilling WWII adventure set in a submarine in the Pacific, by the Boyd Award-winning author of Pacific Glory

In late 1944, America's naval forces face what seems an insurmountable threat from Japan: immense Yamato-class battleships, which dwarf every other ship at sea. Built in secrecy, these ships seem invincible, and lay waste to any challengers. American military intelligence knows of two such ships, but there is rumored to be a third, a newly-built aircraft carrier, ready to launch from Japan's heavily-defended and mined Inland Sea. Such a ship would threaten U.S. Pacific forces, allow Japan to launch air attacks against the U.S. mainland, and change the course of the war.

No American submarine has penetrated the Inland Sea; five boats and their crews have perished in the Bungo Suido strait. Lieutenant Commander Gar Hammond—an aggressive, attacking leader with a reckless streak—is now captain of a new submarine. Hammond may be the navy's only hope to locate and stop the Japanese super-ship before it launches . . . if it even exists.

P.T. Deutermann's previous World War II adventure, Pacific Glory, won acclaim from readers and reviewers, and was honored with the W. Y. Boyd Literary Award for Excellence in Military Fiction, administered by the American Library Association. In Ghosts of Bungo Suido, Deutermann presents another sweeping, action-filled WWII novel, based on a true event from the Pacific theater.
A Kirkus Reviews Best Fiction Book of 2013

P. T. DEUTERMANN is the author of many previous novels including Pacific Glory, which won the W. Y. Boyd Literary Award for Excellence in Military Fiction. Deutermann spent twenty-six years in military and government service, as a captain in the Navy and in the Joint Chiefs of Staff as an arms-control specialist. He lives with his wife in North Carolina.

“A World War II naval thriller in the tradition of Edward L. Beach's Run Silent, Run Deep, pitting an American submarine against daunting odds...The story is full of surprising twists and spectacular explosions...A first-rate yarn of war and the sea that will keep the reader on edge right to the end. ” —Starred Kirkus Review

“P.T. Deutermann's gripping maritime thriller, "Ghosts of Bungo Suido," delivers on the promise of its exotic title. Into this yarn of a perilous mission in the Pacific Ocean during World War II, Deutermann packs capsizing ships, surprise attacks and explosive battles.” —The Washington Post