Applying Principles: Short Essays Based on the Philosophy of Ayn Rand, Economics of Ludwig von Mises, and Psychology of Edith Packer (Paperback) 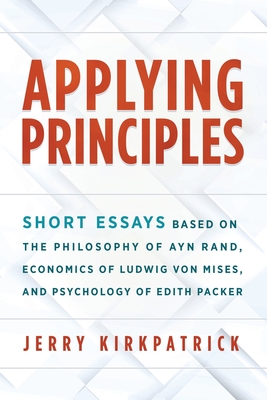 Applying Principles is a collection of short essays published between January 2007 and December 2016 as monthly blogposts at jerrykirkpatrick.blogspot.com. The author's aim was to write interdisciplinary, serious posts to inspire critical thinking. Topics, grouped as chapters, range from capitalism and politics to epistemology, academia, education, psychology, youth sports, and the arts.

The title derives from the author's thirty-six years as educator in the applied science of business marketing. Applied sciences, the author realized early in his career, require a deductive process of applying general, more fundamental principles to specific issues. The business disciplines rest on economics and psychology, and those two in turn, as all sciences, rest on philosophy.

The essays therefore are not journalistic, though many deal with recent issues; they apply fundamental ideas to concrete areas. Examples: "Choice Theory and Capitalism versus Dictatorship," "The Ethics and Epistemology of Peer Review," "Interest and the Core Curriculum," "Ensuring that Disposition Trumps Situation," and "Nutrition and the Argument from Uncertainty."

Posts included in "youth sports" came about because the author's daughter played softball; many comments bring up issues in psychology. And "the arts"-only two posts-stem from the author's lifelong interest in music.

This principle-describe, don't evaluate-has broad application and includes relationships not just of sellers to customers, but also of parents to children, teachers to students, and employers to employees, among others. The principle is recommended as a replacement for negative criticism: "The milk spilled " (describe) as opposed to "I don't believe you did it again How could you " (evaluate). Name-calling, sarcasm, threats, berating, and the like, undercut self-esteem and cause defensiveness by attacking the other person's character or personality.

Factually describing the incident helps the other person (child or student or employee) avoid drawing negative conclusions about him- or herself. The recipient of the criticism is then allowed to regroup and correct the situation. "Constructive criticism," child psychologist Haim Ginott in Between Parent and Child says, "confines itself to pointing out what has to be done, entirely omitting negative remarks about the personality of the child" (or, by extension, student or employee).

Ginott goes on to apply this principle to the extravagant praise that is often heaped on children, such as the ubiquitous "Good job" or "We're so proud of you." Says Ginott, "Direct praise of personality, like direct sunlight, is uncomfortable and blinding. It is embarrassing for a person to be told that he is wonderful, angelic, generous, and humble. He feels called upon to deny at least part of the praise. . . . and he] may have some second thoughts about those who have praised him: 'If they find me so great, they cannot be so smart.' "

The same applies to the puffery heaped on students and employees.