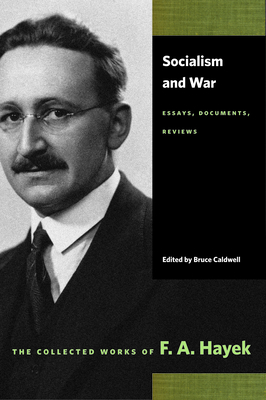 By F. A. Hayek, Bruce Caldwell (Editor)
May Be Available to Order
Limited Availability. We can look into it for you. Availability not guaranteed.

This is book number 10 in the Collected Works of F.A. Hayek (Paperback) series.

In the essays in this volume Hayek contributed to economic knowledge in the context of socialism and war, while providing an intellectual defense of a free society. The connection between the two topics is illuminated through essays containing some of Hayek's contributions to the socialist-calculation debate, writings pertaining to war, and the cult of scientific economic planning from the late 1930s and 1940s.

F. A. Hayek (1899-1992), recipient of the Medal of Freedom in 1991 and co-winner of the Nobel Memorial Prize in Economic Sciences in 1974, was a pioneer in monetary theory and one of the principal proponents of classical liberal thought in the twentieth century. He taught at the London School of Economics, the University of Chicago, and the University of Freiburg.

Bruce Caldwell is Research Professor of Economics and the Director of the Center for the History of Political Economy at Duke University. He is the current general editor of The Collected Works of F. A. Hayek.