Freedom Walkers: The Story of the Montgomery Bus Boycott (Paperback) 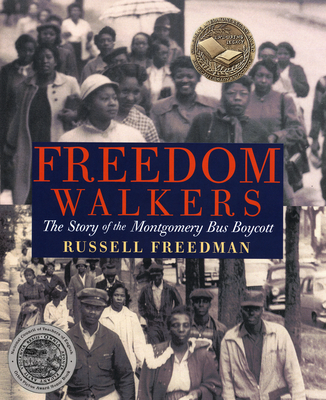 A riveting account of the civil rights boycott that changed history by the foremost author of history for young people.

Now a classic, Freedman’s book tells the dramatic stories of the heroes who stood up against segregation and Jim Crow laws in 1950s Alabama.  Full of eyewitness reports, iconic photographs from the era, and crucial primary sources, this work brings history to life for modern readers.

This engaging look at one of the best-known events of the American Civil Rights Movement feels immediate and relevant, reminding readers that the Boycott is not distant history, but one step in a fight for equality that continues today.

Freedman focuses not only on well-known figures like Claudette Colvin, Rosa Parks, and Martin Luther King Jr., but on the numerous people who contributed by organizing carpools, joining protests, supporting legal defense efforts, and more.  He showcases an often-overlooked side of activism and protest-- the importance of cooperation and engagement, and the ways in which ordinary people can stand up for their beliefs and bring about meaningful change in the world around them.

Freedom Walkers has long been a library and classroom staple, but as interest in the history of protest and the Civil Rights Movement grows, it’s a perfect introduction for anyone looking to learn more about the past-- and an inspiration to take action and shape the future.

Russell Freedman (1929-2018) transformed non-fiction for children through his insightful narrative, comprehensive research, careful selection of photographs, and deep understanding of his subject matter. He was well known for his riveting biographies and masterful accounts of the history of the United States. One of the most honored writers for children, his many awards include the Newbery Medal, three Newbery Honor Medals, the Laura Ingalls Wilder Award, the May Hill Arbuthnot Honor Lecture Award and a National Humanities Medal. Major works include Freedom Walkers, Lincoln: A Photobiography, Because They Marched, The Wright Brothers: How They Invented The Airplane.

★ "A dramatic overview of how the 381-day resistance to segregated buses spearheaded the civil rights movement...Eloquent."—Booklist, Starred Review

★ "Expertly paced text, balanced but impassioned...Such is the immediacy of Freedman's telling that by the time Martin Luther King Jr. steps onboard and takes 'a seat at the front of the bus,' readers will feel like cheering, as if they're witnessing the historic moment themselves."—The Horn Book, Starred Review