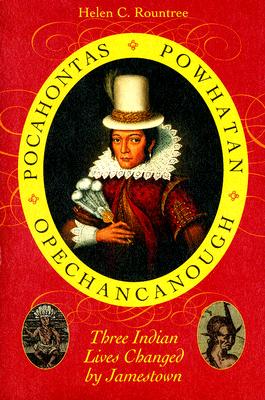 By Helen C. Rountree
May Be Available to Order
Available and Ships as Soon as Possible.

Pocahontas may be the most famous Native American who ever lived, but during the settlement of Jamestown, and for two centuries afterward, the great chiefs Powhatan and Opechancanough were the subjects of considerably more interest and historical documentation than the young woman. It was Opechancanough who captured the foreign captain "Chawnzmit"--John Smith. Smith gave Opechancanough a compass, described to him a spherical earth that revolved around the sun, and wondered if his captor was a cannibal. Opechancanough, who was no cannibal and knew the world was flat, presented Smith to his elder brother, the paramount chief Powhatan. The chief, who took the name of his tribe as his throne name (his personal name was Wahunsenacawh), negotiated with Smith over a lavish feast and opened the town to him, leading Smith to meet, among others, Powhatan's daughter Pocahontas. Thinking he had made an ally, the chief finally released Smith. Within a few decades, and against their will, his people would be subjects of the British Crown.

Despite their roles as senior politicians in these watershed events, no biography of either Powhatan or Opechancanough exists. And while there are other "biographies" of Pocahontas, they have for the most part elaborated on her legend more than they have addressed the known facts of her remarkable life. As the 400th anniversary of Jamestown's founding approaches, nationally renowned scholar of Native Americans, Helen Rountree, provides in a single book the definitive biographies of these three important figures. In their lives we see the whole arc of Indian experience with the English settlers - from the wary initial encounters presided over by Powhatan, to the uneasy diplomacy characterized by the marriage of Pocahontas and John Rolfe, to the warfare and eventual loss of native sovereignty that came during Opechancanough's reign.

Writing from an ethnohistorical perspective that looks as much to anthropology as the written records, Rountree draws a rich portrait of Powhatan life in which the land and the seasons governed life and the English were seen not as heroes but as Tassantassas (strangers), as invaders, even as squatters. The Powhatans were a nonliterate people, so we have had to rely until now on the white settlers for our conceptions of the Jamestown experiment. This important book at last reconstructs the other side of the story.

Helen C. Rountree, Professor Emerita of Anthropology at Old Dominion University, is the author and editor of numerous works on the Native Americans of the East Coast, including Powhatan Foreign Relations, 1500-1722 and, with Thomas E. Davidson, Eastern Shore Indians of Virginia and Maryland (both Virginia).