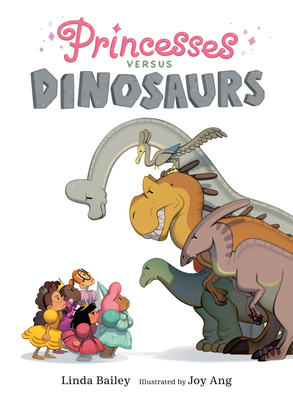 By Linda Bailey, Joy Ang (Illustrator)
$17.99
Available and Ships as Soon as Possible.

Two popular storybook titans, princesses and dinosaurs, battle to determine who should star in this laugh-out-loud picture book for fans of Shark vs Train and The Book With No Pictures.

This is a princess book!

No, it's a dinosaur book!

From Linda Bailey, award-winning and critically acclaimed author, and Joy Ang, Adventure Time-artist and illustrator of the Mustache Baby series, comes an irresistibly irreverent picture book in which plucky princesses and determined dinosaurs have a battle royale over whose book this is. When they start calling in the big guns -- or rather, the big carnivores -- and decide to build a wall to resolve their differences, princesses and dinosaurs alike learn a thing or two about open-mindedness and sharing.

LINDA BAILEY has written more than thirty books for children, including Mary Who Wrote Frankenstein, Carson Crosses Canada, If You Happen to Have a Dinosaur, Under-the-Bed Fred and Seven Dead Pirates. Her books have won the California Young Reader Medal, the Georgia Storybook Award, the Oregon SMART Award and the Ontario Blue Spruce Award, among many others, and have been named to the New York Public Library's Best Books for Kids 2018 and the Ontario Library Association's Best Bets multiple times.

JOY ANG is an artist who has illustrated many books for children, including the Mustache Baby series by Bridget Heos, the New York Times bestselling Atlas Obscura Explorer's Guide for the World's Most Adventurous Kid, 101 Reasons Why I'm Not Taking a Bath and the upcoming Mulan: The Legend of the Woman Warrior. She graduated from the Alberta College of Art & Design in 2007. In addition to designing characters for Cartoon Network's Adventure Time, Joy is also a cover artist for Marvel Comics and Scholastic's Wings of Fire and Dogs of the Drowned City series, and has worked as a concept artist for gaming studios Bioware and Blizzard Entertainment.

“A resolution brings a subtle, welcome message of inclusion and empathy. An engaging read for princesses, dinosaurs, and everyone in between.” --Publishers Weekly