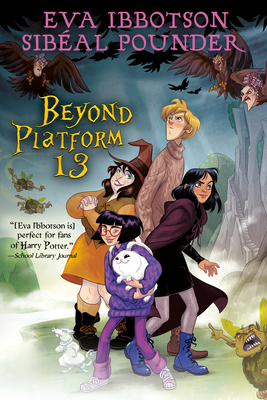 By Sibéal Pounder, Eva Ibbotson
$16.99
Available and Ships as Soon as Possible.

Return to the magical world of Platform 13 in Sibéal Pounder's new novel inspired by Eva Ibbotson's classic, The Secret of Platform 13!

"That's the thing about magic -- it's only real if you believe in it."

The Island of Mist is under siege and Prince Ben and his best friend Odge Gribble -- a hag -- are in hiding. Desperate to find out why the island's protective mist is disappearing, Odge travels through an enchanted gump to Vienna, in search of a mistmaker expert.

But instead Odge finds Lina, a nine-year-old girl looking for adventure. With the help of friends old and new and some very interesting magic, Odge and Lina must discover the secret of the mist, before they lose their beloved island completely.

•  Sibéal Pounder is the author of the bestselling Witch Wars and Bad Mermaids series, as well as the World Book Day mashup, Bad Mermaids Meet the Witches. Before becoming a full-time author, Sibéal worked as a writer and researcher for the Financial Times, with other writing credits including Vogue and Glamour online magazines. Beyond Platform 13, the sequel to Eva Ibbotson's The Secret of Platform 13, is Sibéal's first standalone novel. Visit her online at sibealpounder.com.
•  Eva Ibbotson was born in Vienna in 1925 and moved to England with her father when the Nazis came into power. Ibbotson wrote more than twenty books for children and young adults, many of which garnered nominations for major awards for children's literature in the UK, including the Nestlé Smarties Book Prize and the Whitbread Prize. Eva's critically acclaimed Journey to the River Sea won the Smarties Gold Medal in 2001. Set in the Amazon, it was written in honor of her deceased husband Alan, a former naturalist. Imaginative and humorous, Eva's books often convey her love of nature, in particular the Austrian countryside, which is evident in works such as The Star of Kazan and A Song for Summer. Eva passed away at her home in Newcastle on October 20, 2010. Her final book, One Dog and His Boy, was published in May 2011.