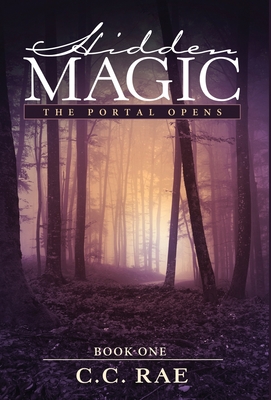 This is book number 1 in the Hidden Magic series.

Nicole Jameson's repressed power opens a portal to another realm--Veil--and her life in quiet Yuma, AZ comes to a screeching halt. When Raiden comes crashing into her world his nine years of isolation finally comes to an end, but he finds himself caught between his plans for revenge, orders from the leaders of his realm, and terrible visions of Nicole's future. The more time he spends with her the more he realizes he would do anything to stop those visions, if his secrets don't chase her away first.

Nicole must learn to control the immense power that has lain dormant inside her for eighteen years of her life and threatens to burn her from the inside out. When she saves a prisoner from cursed chains, she earns herself the trust of a reviled enemy of the other realm, but she can use all the allies she can get when his captor comes looking for them, the leaders of Veil are looking for her, the portal won't close, and she can't reconcile her an attraction to Raiden with her scarred outlook on love. When nightmares and mistakes from Raiden's past come looking for him, he's willing to risk everything but might lead Nicole right to the very fate he hopes to change.

In this gripping tale, a powerful young woman, a seer, and a dragon face a world that will try to define them and control them. Their enemies will try to decide their fates and force them to realize their best chance at survival is facing it all together.