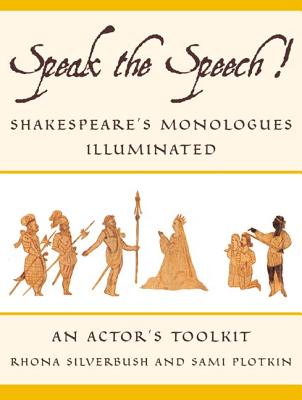 By Rhona Silverbush, Sami Plotkin
$40.00
Available and Ships as Soon as Possible.

The most comprehensive sourcebook of Shakespeare's monologues ever available in one volume.

A detailed guide to approaching Shakespearean text, Speak the Speech! contains everything an actor needs to select and prepare a Shakespeare monologue for classwork, auditions, or performance.

Included herein are over 150 monologues. Each one is placed in context with a brief introduction, is carefully punctuated in the manner that best illustrates its meaning, and is painstakingly and thoroughly annotated. Each is also accompanied by commentary that will spark the actor's imagination by exploring how the interrelationship of meter and the choice of words and sounds yields clues to character and performance. And throughout the book sidebars relate historical, topical, technical, and other useful and entertaining information relevant to the text. In addition, the authors include an overview of poetic and rhetorical elements, brief synopses of all the plays, and a comprehensive index along with other guidelines that will help readers locate the perfect monologue for their needs.

More than just an actor's toolkit, Speak the Speech! is also an entertaining resource that will help demystify Shakespeare's language for the student and theater lover alike.

Rhona Silverbush studied theatre and psychology at Brandeis University and holds a law degree from Boston College Law School; she practiced asylum law before returning to her first loves, writing and the theatre. She has acted with regional theatre and Shakespeare companies, was adjunct faculty at Columbia University's Teachers College and currently teaches and coaches privately. She continues to write with Sami Plotkin and on her own and is also co-author with Carol Zeavin of the Terrific Toddlers series of picture books published by Magination Press, the children's book imprint of the American Psychological Association.

She was awarded a grant from the Ludwig Vogelstein Foundation for Speak the Speech! in 1999.

Sami Plotkin graduated summa cum laude from Brandeis University with a double major in Theatre Arts and English Literature, and honed her stagecraft in London under the tutelage of Royal Shakespeare Company members. She later earned her M.F.A. at Columbia University's School of the Arts. Sami has performed Shakespeare in the United States and on tour in Europe and the former Soviet Union. Since then she has taught Working with Shakespeare’s Text at Michael Howard Studios, drama in New York City public schools, and guest workshops for middle and high school drama productions. She coaches privately and continues to write with Rhona Silverbush and on her own.

She was awarded a grant from the Ludwig Vogelstein Foundation for Speak the Speech! in 1999.

“I celebrate all things that demystify Shakespeare so that artists and audiences alike can breathe and live inside his wonderous words. Speak the Speech! does just that. It is a great resource not just for actors but for anyone who loves the Bard.” —George C. Wolfe, Producer, the Joseph Papp Public Theater/New York Shakespeare Festival

Show Business Weekly
Trippingly on the Tongue
I’m very excited about a new book that has landed on my desk, and I’m heartily recommending it to all actors out there who frequently find themselves in the position of having to come up with a polished classical monologue for auditions or for class. Speak the Speech! Shakespeare’s Monologues Illuminated by Rhona Silverbush and Sami Plotkin has just been published by FSG/Faber and Faber, and this big, exhaustive work (over a thousand pages) examines 150 of the Bard’s monologues for both men and women, annotating the language and providing insightful commentary to spark the performer’s imagination. I don’t know of another book quite like it for classical actors, and for all students and lovers of Shakespeare, it strikes me as a must-have. Speak the Speech! is available in bookstores now.


CHOICE, Current Reviews for Academic Libraries, March 2003, Vol 40, No. 07
Silverbush and Plotkin have assembled a mighty resource for actors preparing Shakespeare monologues for classes or auditions. The authors deliver cohesively organized entries that help users select monologues and cogently written commentaries that aid comprehension and profile variant interpretive treatments of the speeches. The volume includes 148 prose and blank verse speeches -- at least one example from each of Shakespeare’s 37 plays appears and almost half are monologue options for women. Each monologue is accompanied by expansive apparatus providing tips ranging from how frequently the monologue turns up in auditions, to annotation clarifying meaning of obscure words and strange syntax, to pointers on interpretive tactics actors can employ, to guidance on “significant scans.” The book’s content also embraces techniques for analyzing Shakespeare’s text, a capsule discussion of Shakespeare’s world, and plot synopses for all plays. Although the authors omit some monologues that students may wish to study, and although some commentaries may not explore interpretive perspectives exhaustively, this remarkable volume will indeed serve as an informative and user-friendly “tool kit” for actors. Teachers will wish to consider it for course adoption. Summing Up: Highly recommended. Lower-division undergraduates through graduate students; professionals. -- P. D. Nelsen, Marlboro College