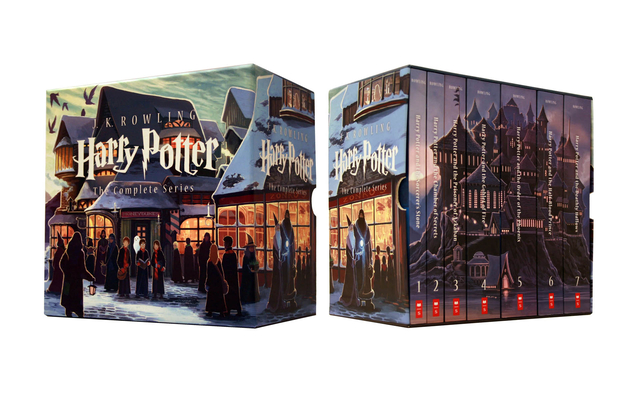 The perfect gift for collectors and new readers alike, we now present a breathtaking special edition boxed set of J. K. Rowling's seven bestselling Harry Potter books!
The box itself is beautifully designed with new artwork by Kazu Kibuishi, and the books create a gorgeous, magical vista when the spines are lined up together. The Harry Potter series has been hailed as "one for the ages" by Stephen King and "a spellbinding saga" by USA Today. Now is your chance to give this set to a reader who is ready to embark on the series that has changed so many young readers' lives.

J.K. ROWLING is the author of the seven Harry Potter books, which were first published between 1997 and 2007. The enduringly popular adventures of Harry, Ron, and Hermione have sold over 500 million copies, been translated into over 80 languages, and made into eight blockbuster films. Alongside the Harry Potter series, she also wrote three short companion volumes — Quidditch Through the Ages, Fantastic Beasts and Where to Find Them, and The Tales of Beedle the Bard — which were published in aid of Comic Relief and Lumos. In 2016, J.K. Rowling resumed Harry’s story in a stage play, Harry Potter and the Cursed Child, which she wrote with playwright Jack Thorne and director John Tiffany, and which is now in theaters across the world. In the same year, she wrote the screenplay for the film Fantastic Beasts and Where to Find Them, the first in a series featuring magizoologist Newt Scamander. She is also the author of a stand-alone novel for adults, The Casual Vacancy, and, under the pseudonym Robert Galbraith, writes the Strike detective series. In 2020, J.K. Rowling returned to publishing for younger children with the fairy tale The Ickabog, the royalties from which she is donating to groups affected by the Covid-19 pandemic. She lives in Scotland with her family, and is at her happiest alone in a room, making things up.

Kazu Kibuishi is the creator of the #1 New York Times bestselling Amulet series, which is available in 16 languages. He is also the creator of Copper, a collection of his popular webcomic that features an adventuresome boy-and-dog pair. Kazu also illustrated the covers of the 15th anniversary paperback editions of the Harry Potter series written by J.K. Rowling. He lives and works near Seattle, Washington, with his wife, Amy Kim Kibuishi, and their children. Visit Kazu online at boltcity.com