Winter of the World: Book Two of the Century Trilogy (Mass Market) 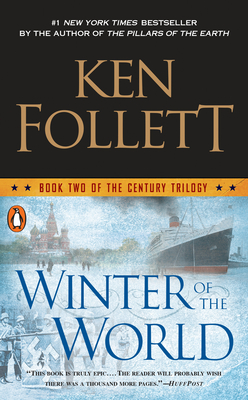 By Ken Follett
$10.99
Available and Ships as Soon as Possible.

This is book number 2 in the The Century Trilogy series.

"This book is truly epic. . . . The reader will probably wish there was a thousand more pages." —The Huffington Post

Picking up where Fall of Giants, the first novel in the extraordinary Century Trilogy, left off, Winter of the World follows its five interrelated families—American, German, Russian, English, and Welsh—through a time of enormous social, political, and economic turmoil, beginning with the rise of the Third Reich, through the great dramas of World War II, and into the beginning of the long Cold War.

Carla von Ulrich, born of German and English parents, finds her life engulfed by the Nazi tide until daring to commit a deed of great courage and heartbreak . . . . American brothers Woody and Chuck Dewar, each with a secret, take separate paths to momentous events, one in Washington, the other in the bloody jungles of the Pacific . . . . English student Lloyd Williams discovers in the crucible of the Spanish Civil War that he must fight Communism just as hard as Fascism . . . . Daisy Peshkov, a driven social climber, cares only for popularity and the fast set until war transforms her life, while her cousin Volodya carves out a position in Soviet intelligence that will affect not only this war but also the war to come.

Look out for Ken's newest book, A Column of Fire, available now.

Ken Follett is one of the world’s best-loved authors, selling more than 160 million copies of his thirty books. Follett’s first bestseller was Eye of the Needle, a spy story set in the Second World War.

In 1989 The Pillars of the Earth was published, and has since become the author’s most successful novel. It reached number one on bestseller lists around the world and was an Oprah’s Book Club pick.

Its sequels, World Without End and A Column of Fire, proved equally popular, and the Kingsbridge series has sold 38 million copies worldwide.

Follett lives in Hertfordshire, England, with his wife Barbara. Between them they have five children, six grandchildren, and three Labradors.

Praise for Winter of the World

"Some of the biggest-picture fiction being written today." —The Seattle Times

"A consistently compelling portrait of a world in crisis." —The Washington Post

"[Follett] is so good at plotting a story, even one that takes on such a complex topic such as the World War II era. That's what makes Winter of the World so hard to put down. You want to know what happens next." —The Associated Press

"The man tells a story so well. . . . Follett can make things glow with some beautifully written episodes." —St. Louis Post-Dispatch

"Clips along at a brisk pace. . . [Follett] knows how to keep the pages turning and how to make the reader feel a kinship with the characters' struggles. . . . No matter the ultimate destination, readers can expect to savor the journey." —The Christian Science Monitor