Ayn Rand Answers: The Best of Her Q & A (Paperback) 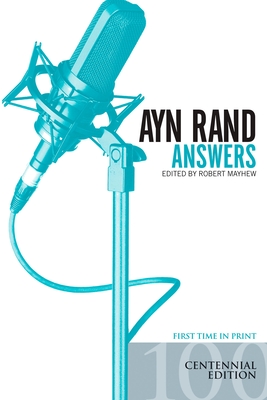 By Robert Mayhew (Editor)
$16.00
Available and Ships as Soon as Possible.

After the publication of Atlas Shrugged in 1957, Ayn Rand occasionally lectured in order bring her philosophy of Objectivism to a wider audience and apply it to current cultural and political issues. These taped lectures and the question-and-answer sessions that followed not only added an eloquent new dimension to Ayn Rand's ideas and beliefs, but a fresh and spontaneous insight into Ayn Rand herself. Never before available in print, this publishing event is a collection of those enlightening Q & As.

Born February 2, 1905, Ayn Rand published her first novel, We the Living, in 1936. Anthem followed in 1938. It was with the publication of The Fountainhead (1943) and Atlas Shrugged (1957) that she achieved her spectacular success. Rand’s unique philosophy, Objectivism, has gained a worldwide audience. The fundamentals of her philosophy are put forth in three nonfiction books, Introduction to Objectivist Epistemology, The Virtues of Selfishness, and Capitalism: The Unknown Ideal. They are all available in Signet editions, as is the magnificent statement of her artistic credo, The Romantic Manifesto.