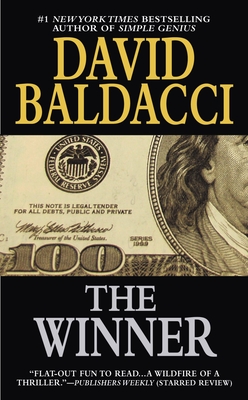 By David Baldacci
$8.00
Available and Ships as Soon as Possible.

A rags-to-riches deal for single mother LuAnn Tyler is deadlier than she ever could have imagined in this #1 New York Times bestselling thriller from David Baldacci.

THE DREAM
She is twenty, beautiful, dirt-poor, and hoping for a better life for her infant daughter when LuAnn Tyler is offered the gift of a lifetime, a $100 million lottery jackpot. All she has to do is change her identity and leave the U.S. forever.

THE KILLER
It's an offer she dares to refuse...until violence forces her hand and thrusts her into a harrowing game of high-stakes, big-money subterfuge. It's a price she won't fully pay...until she does the unthinkable and breaks the promise that made her rich.

THE WINNER
For if LuAnn Tyler comes home, she will be pitted against the deadliest contestant of all: the chameleon-like financial mastermind who changed her life. And who can take it away at will...

DAVID BALDACCI is a global #1 bestselling author, and one of the world's favorite storytellers. His books are published in over forty-five languages and in more than eighty countries, with 150 million copies sold worldwide. His works have been adapted for both feature film and television. David Baldacci is also the cofounder, along with his wife, of the Wish You Well Foundation, a nonprofit organization dedicated to supporting literacy efforts across America. Still a resident of his native Virginia, he invites you to visit him at DavidBaldacci.com and his foundation at WishYouWellFoundation.org.

"Flat out fun to read...a wildfire of a thriller."
Publisher's Weekly

"Baldacci has come up with another good one."
New York Times

"Aptly named...the devilish tale of a heroine who gambles her soul."
People

"He's hit the jackpot again...Baldacci pushes the pace pedal to the floor and takes the turns on two wheels."
New York Daily News

"His eye for a cinematic book doesn't waver...Enjoy the ride."
Cleveland Plain Dealer

"The action in this book is relentless...Baldacci has created one of the more amazing characters you're likely to run across--LuAnn Tyler."
Houston Chronicle

"It's hard to put the book down."
Chicago Tribune