Lamb: The Gospel According to Biff, Christ's Childhood Pal (Hardcover) 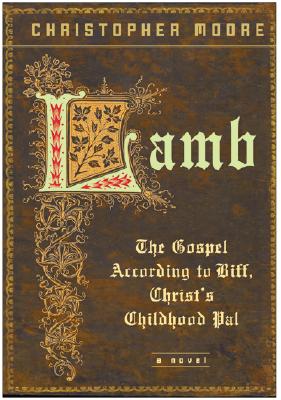 By Christopher Moore
$25.95
Email or call for price.

The birth of Jesus has been well chronicled, as have his glorious teachings, acts, and divine sacrifice after his thirtieth birthday. But no one knows about the early life of the Son of God, the missing years -- except Biff.Ever since the day when he came upon six-year-old Joshua of Nazareth resurrecting lizards in the village square, Levi bar Alphaeus, called "Biff,"had the distinction of being the Messiah's best bud. That's why the angel Raziel has resurrected Biff from the dust of Jerusalem and brought him to America to write a new gospel, one that tells the real, untold story. Meanwhile, Raziel will order pizza, watch the WWF on TV, and aspire to become Spider-Man.Verily, the story Biff has to tell is a miraculous one, filled with remarkable journeys, magic, healings, kung-fu, corpse reanimations, demons, and hot babes -- whose considerable charms fall to Biff to sample, since Josh is forbidden the pleasures of the flesh. (There are worse things than having a best friend who is chaste "and" a chick magnet ) And, of course, there is danger at every turn, since a young man struggling to understand his godhood, who is incapable of violence or telling anything less than the truth, is certain to piss some people off. Luckily Biff is a whiz at lying and cheating -- which helps get his divine pal and him out of more than one jam. And while Josh's great deeds and mission of peace will ultimately change the world, Biff is no slouch himself, blessing humanity with enduring contributions of his own, like sarcasm and cafe latte. Even the considerable wiles and devotion of the Savior's pal may not be enough to divert Joshua from his tragic destiny. But there's no one who loves Josh more --except maybe "Maggie," Mary of Magdala -- and Biff isn't about to let his extraordinary pal suffer and ascend without a fight."Lamb" is the crowning achievement of Christopher Moore's storied career: fresh, wild, audacious, divinely hilarious, yet heartfelt, poignant, and alive, with a surprising reverence. Let there be rejoicing unto the world Christopher Moore is come -- to bring truth, light, and big yuks to fans old and new with the Greatest Story Never Told