All Our Names (Paperback) 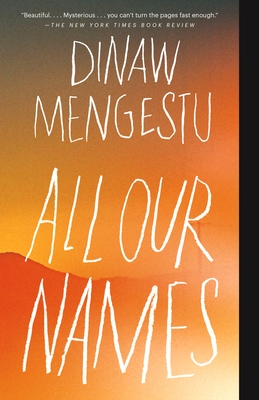 By Dinaw Mengestu
$16.00
Available and Ships as Soon as Possible.

Named a best book of the year by The New York Times, The Washington Post, NPR, The Boston Globe, The Christian Science Monitor, and The Daily Beast

A sweeping, continent-spanning story about the love between men and women, between friends, and between citizens and their countries, All Our Names is a transfixing exploration of the relationships that define us. Fleeing war-torn Uganda for the American Midwest, Isaac begins a passionate affair with the social worker assigned to him. But the couple’s bond is inescapably darkened by the secrets of Isaac’s past: the country and the conflict he left behind and the beloved friend who changed the course of his life—and sacrificed everything to ensure his freedom. From acclaimed author Dinaw Mengestu, here is a love story for our time.

Dinaw Mengestu is the award-winning author of two previous novels, The Beautiful Things That Heaven Bears (2007) and How to Read the Air (2010). He is a graduate of Georgetown University and of Columbia University’s M.F.A. program in fiction and the recipient of a 5 Under 35 award from the National Book Foundation and a 20 Under 40 award from The New Yorker. His journalism and fiction have appeared in such publications as Harper’s Magazine, Granta, Rolling Stone, The New Yorker, and The Wall Street Journal. He is a recipient of a 2012 MacArthur Foundation genius grant and currently lives in New York City.

“Heart-rending. . . . Both invokes and channels Great Expectations—a novel, like this one, about letting go of myths we’ll never inhabit, so that we might craft new stories that free us to live.” —Milwaukee Journal Sentinel

“Taut and swift . . . with an abiding mystery driving it forward…One reads to the end . . . with a kind of desperate intensity. . . . Extraordinary.” —The Boston Globe

“Mengestu’s voice is a finely tuned instrument. . . . Its words may be simple, but All Our Namesspeaks volumes.” —San Francisco Chronicle

“Delicately drawn. . . . The emotional power of All Our Names seeps through lines that seem placid on the surface. . . . This is not an immigrant story we already know.” —The Washington Post

“Beautifully written. . . . A powerful new addition to a growing list of accomplishments for Mengestu.” —Chicago Tribune

“Elegiac. . . . A mourning for what has been lost not so much by any individual, but by whole countries and even a continent, as power corrupts absolutely and leaves its citizens with two choices: Endure or escape.” —The Seattle Times

“[Mengestu] is rapidly becoming a writer on the global stage.” —The Guardian (UK)

“Mengestu is the best writer of the African diaspora we have, and this book expands upon and updates his craft.” —The New York Observer

“The story of Helen and the two Isaacs, and the ways their longings mesh or don’t, has a subtle power that gets under the surface of events to explore the complexities of human relationships.” —The Columbus Dispatch

“Mengestu grounds big ideas about an uprising in Africa in simple emotions. The story’s narrator, a student turned revolutionary, gets swept up in love as easily as he does in politics.” —Time Out New York (critics’ pick)

“The enigmatic Isaac radiates a sense of quiet purpose that makes him both substantial and immensely appealing. Mengestu’s assertion of the claims of the self against the ideologies of tribe, nation or home is all the more powerful for being expressed through paradox.” —London Review of Books

“Subtly powerful. . . . We need globe-straddlers like Mengestu to show us that love, like hate, respects no borders.” —Boris Kachka, author of Hothouse

“Writing with the kind of effortless ease suggestive of much painstaking struggle, Mengestu locates the novel’s horror not in war per se, but in those seemingly born to its bidding.” —Toronto Star

“Mengestu portrays the intersection of cultures experienced by the immigrant with unsettling perception. . . . [He] evokes contrasting landscapes but focuses on his characters . . . who are all caught in a cycle of connection and disruption, engagement and abandonment, hope and disillusion.” —Publishers Weekly (starred review, “Pick of the Week”)